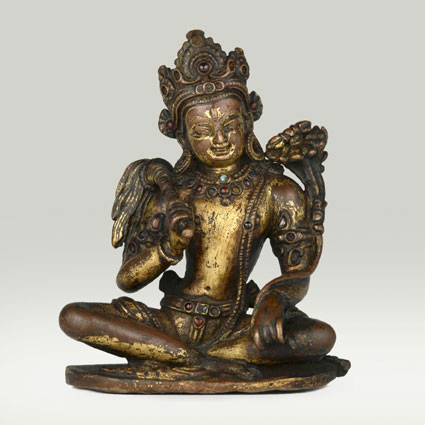 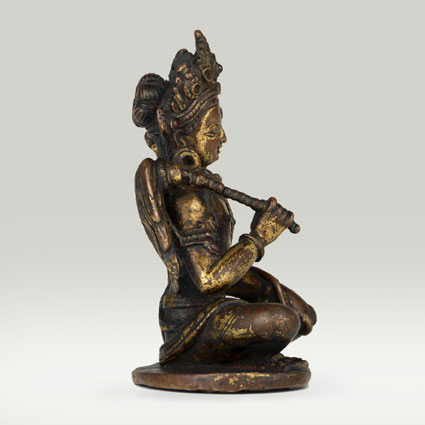 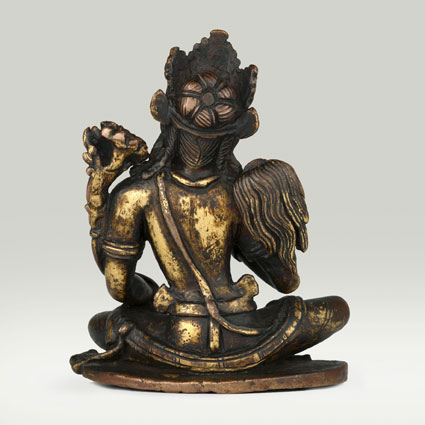 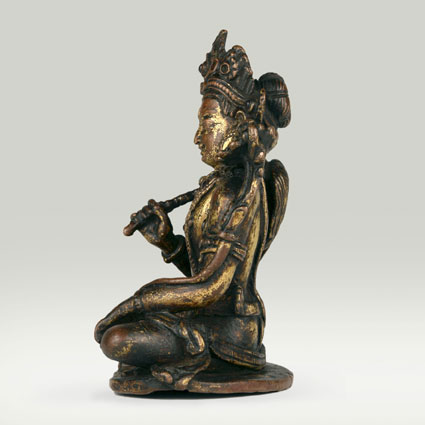 Description
Iconography
Vajrapani - "with the Diamond Sceptre in the Hand"

Copper with remains of gilt; solid cast in one piece.
The separately made lotus pedestal is lost.
The jeweled ornaments are inset with precious stones.

Vajrapani (Tib. Phyag na rdo rje) is seated in the attitude of royal ease (rajalilasana) on a stand earlier mounted upon a single lotus pedestal. He hold with the right hand a fly-whisk carried over the right shoulder and holds with the left hand the stalk of a lotus flower blossoming at the shoulder level carrying his attribute the diamond sceptre (vajra). The Bodhisattva is clad with an ornamented cloth tied around the waist with a belt. He wears princely ornaments, namely a three fold jewelled crown, earrings, a necklace with attached pendants, ornaments on the upper arms, wrists, and the “investiture with the sacred thread” (yajnopavita).

This image formed earlier part of a triad composed of Vasudhara (Tib. Nor rgyun ma) flanked by Avalokitesvara and Vajrapani. The Vasudhara forms part of the Berti Aschmann Collection.

Uhlig, Helmut , 1995. On the Path to Enlightenment: The Berti Aschmann Foundation of Tibetan Art [catalogue of the exhibition held at the Museum Rietberg, Zürich]. Zürich: Museum Rietberg. P. 152, no. 97