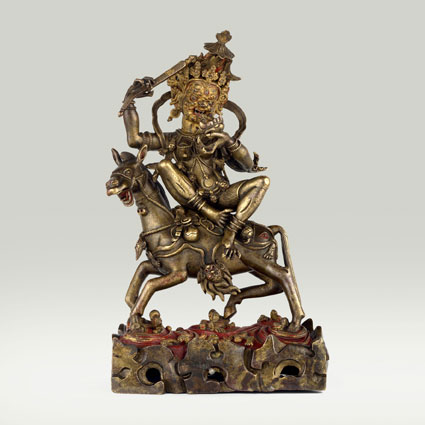 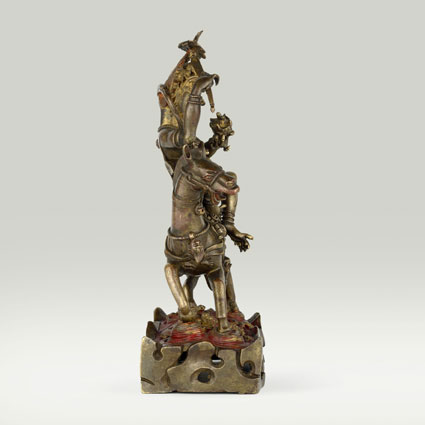 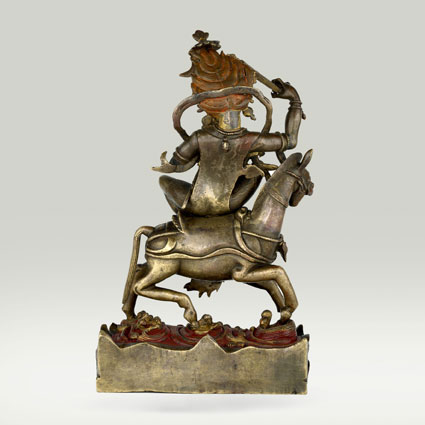 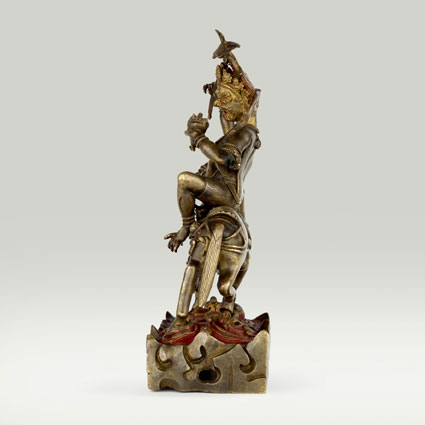 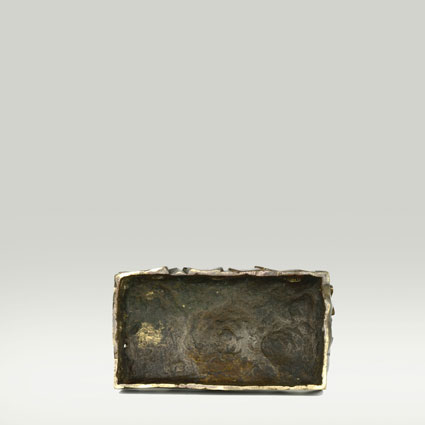 Description
Iconography
Hollow cast in two parts.
The face of the goddess has traces of  painted cold gold  and the hair and part of the pedestal are painted with a red pigment.
The bottom of the pedestal is not sealed.

This image represents a two-armed form of Sri-Devi (Tib. dPal ldan lha mo) who is the chief guardian-goddess (dharmapala) of the Tibetan Buddhist pantheon.
The three-eyed fearsome Sri-Devi is riding a mule on a sea of blood on a rock shaped pedestal. The right hand brandishes a club adorned with a skull (yamadanda) and the left hand holds in front of her breast the blood-filled skull-cup (kapala) of a child. She wears a flowing garment and is decorated with a diadem of skulls, a garland of heads and bone ornaments. Above the hair of Sri-Devi is an umbrella made of peacock feathers.
Palden Lhamo
Palden Lhamo (pronounced: 'Pelden Lhamo'), Panden Lamo (Wylie transliteration: dPal ldan Lha mo), Shri Devi (Sanskrit), or Okkin Tungri (Mongolian) is a protecting Dharmapala of the teachings of Gautama Buddha in the Gelug school of Tibetan Buddhism. She is also called Remati. She is the wrathful deity considered to be the principal Protectress of Tibet.
Palden Lhamo is the consort of Mahakala and has been described as "the tutelary deity of Tibet and its government", and as "celebrated all over Tibet and Mongolia, and the potent protector of the Dalai and Panchen Lamas and Lhasa."

de Nebesky-Wojkowitz, René, 1956. Oracles and Demons of Tibet: The Cult and Iconography of the Tibetan Protective Deities. s’Gravenhage: Mouton & Co. Pp. 22-37 - References to the iconography of Shri Devi