Sita Acala - the "White Immovable One" 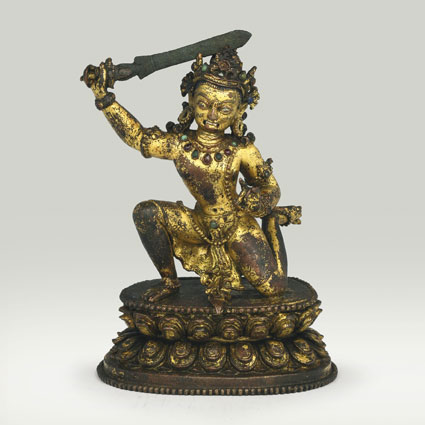 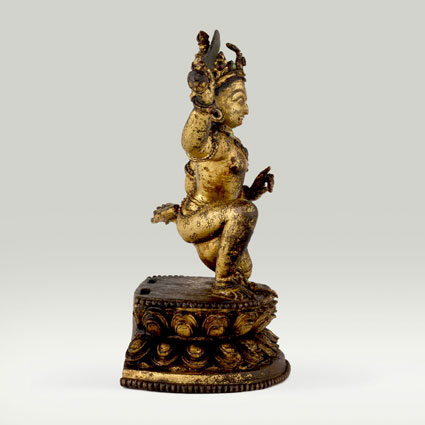 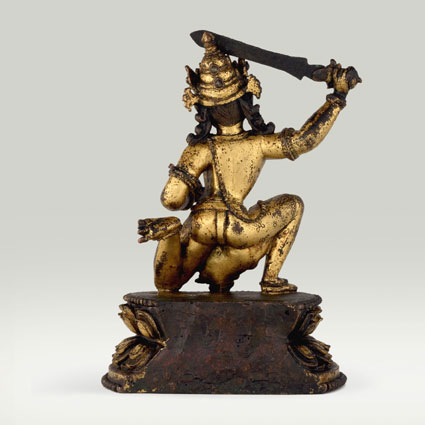 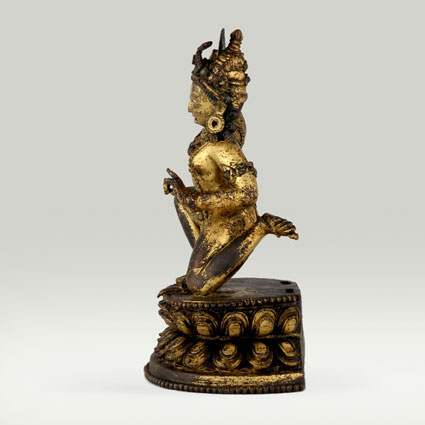 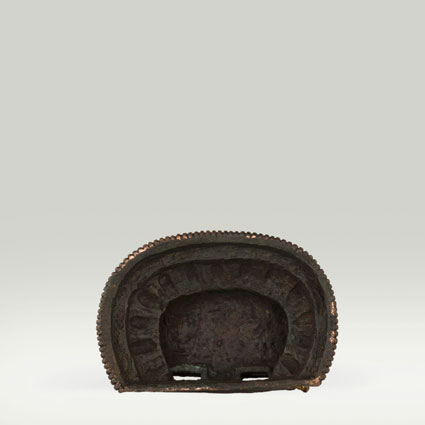 Copper with traces of gilt; cast in one piece: figure solid, pedestal hollow.
The separately cast nimbus is lost.
The garment is decorated with chased textile pattern.
The jewelled ornaments are inset with precious and semi-precious stones. T
he bottom of the pedestal is not sealed.

The fearful two-eyed form of Sita Acala or “white Acala” (Tib. Mi gyo ba dkar po) is shown in kneeling position on a double lotus pedestal. He brandishes in the right uplifted hand his principal attribute the sword (khadga)as symbol of “cutting through ignorance”, and displays with the left hand the gesture of threatening (tarjani-mudra). Acala wears princely ornaments, namely the jewelled three-pointed crown, a pair of circular earrings, a necklace, ornaments on both upper arms, the “investiture with the beaded sacred thread” (ratnopavita), bracelets and anklets. The name Acala means “mountain” or literally “immobile”, and he is always shown in fearsome attitude and represents one of the ten Khroda protector deities in various Mandalas.

On the back of the pedestal is the the name of the deity scratched in Tibetan dBu canscript: // mi ga gyo ba// for/ Mi gyo ba/(Skt. Acala). This inscription was certainly added in Tibet. The use of precious stones for the jewelled decorations is a clear indication that this image was cast in by Newar craftsman in the Kathmandu Valley and originally not intended for export to Tibet. Images cast in Nepal for the export to Tibet and the ones made by Newars inside Tibet are usually inset with semi-precious stones such as turquoise and coral.

The Sadhanamala(SM), Nispannayogavali (NSP), Kryasamgraha (KS)and the Pindikrama-Sadhana (PKS)contain descriptions of several forms of Acala (Tib. Mi gyo ba): SM86–87, 211–12; NSP1–3, 11, 20, 26; KS2; PKS175–78. Acala is known in the Sanskrit literature under various different names such as Candacala, Candamaharosana, Mahacandarosana(SM 85–88), Kekara(SM212) or Vajrabhisana (NSP11, KS 2). In this publication all standing forms of Acala, regardless whether trampling on Ganesa or not are classified as Nila Acala(“Blue Acala”) (Tib. Mi gyo ba sngon po). The kneeling forms of Acala are classified as Sita Acalaor “white Acala” (Tib. Mi gyo ba dkar po). Both forms can have two or three eyes.
Acala

Also known as Acalanatha, Aryacalanatha, Acala-vidya-raja and Candamaharosana. In Vajrayana Buddhism, Acala (alternatively, Achala or Acala) is the best known of the Five Wisdom Kings of the Womb Realm. Acala means "The Immovable One" in Sanskrit. Acala is also the name of the eighth of the ten stages of the path to buddhahood.

Acala is the destroyer of delusion and the protector of Buddhism. His immovability refers to his ability to remain unmoved by carnal temptations. Despite his fearsome appearance, his role is to aid all beings by showing them the teachings of the Buddha, leading them into self-control.

He is seen as a protector and aide in attaining goals. Temples dedicated to Acala perform a periodic fire ritual in devotion to him.

The buddha Akshobhya, whose name also means 'the immovable one', is sometimes merged with Acala. However, Acala is not a buddha, but one of the Five Wisdom Kings of the Womb Realm in Vajrayana as found in the Indo-Tibetan tradition, as well as the Japanese Shingon sect of Buddhism. As 'Fudo myo-o', Acala is considered one of the Thirteen Buddhas in Japan

Acala is typically depicted with a sword for subduing demons in his right hand and a rope for catching and binding them in his left hand.  He has a fearsome blue visage and is surrounded by flames, representing the purification of the mind.  He is often depicted seated or standing on a rock to show his immovability. His hair commonly has seven knots and is draped on his left side, a servant hairstyle in Buddhist iconography. He is frequently depicted with two protruding fangs. One tooth points down, representing his compassion to the world, and one tooth points up, representing his passion for truth.