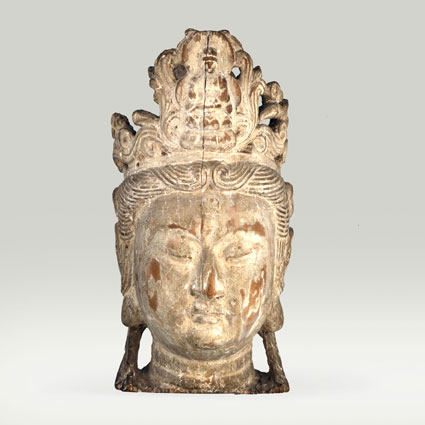 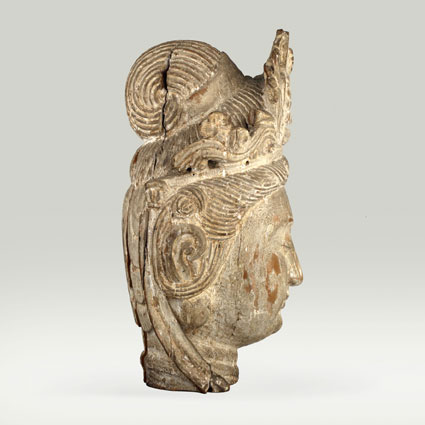 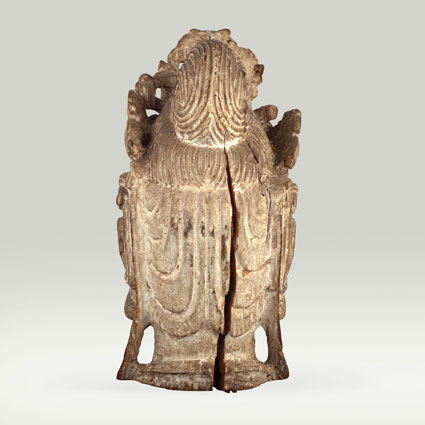 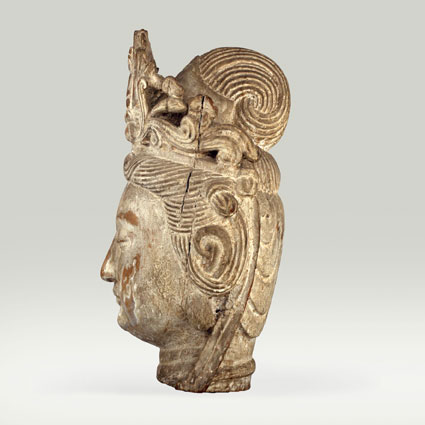 Mythology
Iconography
One Buddhist legend presents Guan Yin as vowing to never rest until she had freed all sentient beings from samsara, reincarnation. Despite strenuous effort, she realized that still many unhappy beings were yet to be saved. After struggling to comprehend the needs of so many, her head split into eleven pieces. Amitabha Buddha, seeing her plight, gave her eleven heads with which to hear the cries of the suffering. Upon hearing these cries and comprehending them, Avalokitesvara attempted to reach out to all those who needed aid but found that her two arms shattered into pieces. Once more, Amitabha came to her aid and appointed her a thousand arms with which to aid the many.
Many Himalayan versions of the tale include eight arms with which Avalokitesvara skillfully upholds the Dharma, each possessing its own particular implement, while more Chinese-specific versions give varying accounts of this number.
Guan Yin(For the Chen Dynasty empress whose Buddhist nun name was "Guanyin", see Empress Shen Wuhua)

Guan Yin is the bodhisattva of compassion as venerated by East Asian Buddhists, usually as a female. She is also known as the Chinese Bodhisattva of Compassion.In Japanese, Guanyin is pronounced Kannon or more formally Kanzeon; the spelling Kwannon, based on a pre-modern pronunciation, is sometimes seen. In Korean, the Bodhisattva is called Gwan-eum or Gwanse-eum, In Thai, the name is called Kuan Eim or Prah Mae Kuan Eim, and in Vietnamese, the name is Quan Am or Quan The Am Bo Tat. It is generally accepted that Guanyin originated as the Sanskrit Avalokitesvara, which is her male form. Another version suggests she originated from the Taoist Immortal "Ci Hang Zhen Ren”. Commonly known in the West as the Goddess of Mercy, Guanyin is also revered by Chinese Taoists as an Immortal. The name Guanyin, also spelt Kuan Yin, is short for Kuan-shih Yin (Py. Guānshì Yīn,) which means "Observing the Sounds (or Cries) of the World".

Depiction
Guanyin is the Chinese name for the Bodhisattva Avalokitesvara. However, folk traditions in China and other East Asian countries have added many distinctive characteristics and legends. Avalokitesvara was originally depicted as Buddha when he was still a prince, and therefore wears chest-revealing clothing and may even sport a moustache. However, in China, Guanyin is usually depicted as a woman. Additionally, some people believe that Guanyin is neither man nor woman.

In China, Guanyin is usually shown in a white flowing robe, and usually wearing necklaces of Indian/Chinese royalty. In the right hand is a water jar containing pure water, and in the left, a willow branch. The crown usually depicts the image of Amitabha Buddha, Guan Yin's spiritual teacher before she became a Bodhisattva.
In some Buddhist temples and monasteries, Guanyin images are occasionally depicted as a young man dressed in Northern Song Buddhist robes sitting gracefully. He is usually depicted looking or glancing down, symbolizing that Guanyin continues to watch over the world.
There are also regional variations of Guan Yin depictions. In the Fukien region of China, for example, a popular depiction of Guan Yin is as a maiden dressed in Tang dynasty style clothing carrying a fish basket. A popular image of Guan Yin as both Guan Yin of the South Sea and Guan Yin With a Fish Basket can be seen in late 1500s Chinese encyclopedias and in prints that accompany the novel Golden Lotus.

In Chinese art, Guan Yin is often depicted either alone, standing atop a dragon, accompanied by a bird, flanked by two children, or flanked by two warriors. The two children are her acolytes who came to her when she was meditating at Mount Putuo. The girl is called Long Nü and the boy Shan Tsai. The two warriors are the historical character Guan Yu, who comes from the Three Kingdoms period, and the mythological character Wei Tuo who features in the Chinese classic Canonization of the Gods. The Buddhist tradition also displays Guan Yin, or other buddhas and bodhisattvas, flanked with the two said warriors, but as bodhisattvas who protect the temple and the faith itself.
In Chinese Buddhist iconography, Guan Yin is often depicted as meditating or sitting alongside one of the Buddhas and usually accompanied by another bodhisattva. Which buddha or bodhisattva usually depends upon which school it represents. In the Pure Land school, for example, Guan Yin is frequently depicted as standing alongside Amitabha Buddha and bodhisattva Mahasthamaprapta. Temples that revere the bodhisattva Ksitigarbha usually depict him meditating alongside the Buddha and Guan Yin.

Along with Buddhism, Guanyin's veneration was introduced into China as early as the 1st century CE, and reached Japan by way of Korea soon after Buddhism was first introduced into the country in the mid-7th century.
More recently in Europe and America, a new wave of believers have spread a devotional cult beyond Buddhism, Taoism and folk traditional beliefs. Guan Yin is not only a bodhisattva or a goddess but a focus of devotion by some Eastern New Age movements.

Representations of the bodhisattva in China prior to the Song Dynasty (960-1279) were masculine in appearance. Images which later displayed attributes of both genders are believed to be in accordance with the Lotus Sutra, where Avalokitesvara has the supernatural power of assuming any form required to relieve suffering, and also has the power to grant children (possibly relating to the fact that in this Sutra -unlike in others- both men and women are believed to have ability to achieve enlightment). Because this bodhisattva is considered the personification of compassion and kindness, a mother-goddess and patron of mothers and seamen, the representation in China was further interpreted in an all-female form around the 12th century. In the modern period, Guan Yin is most often represented as a beautiful, white-robed woman, a depiction which derives from the earlier Pandaravasini form.