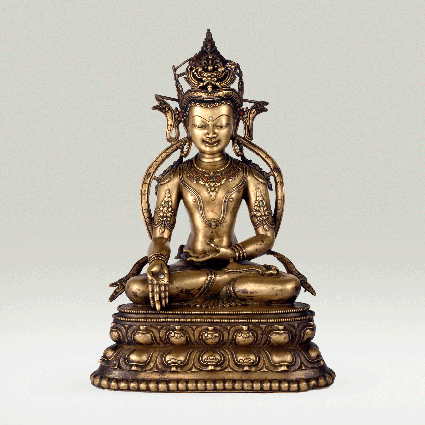 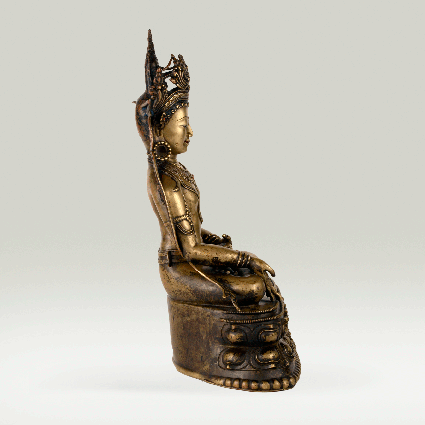 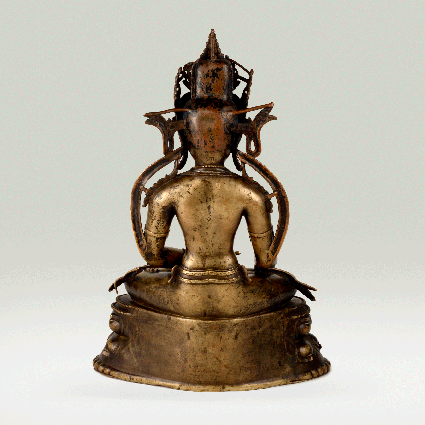 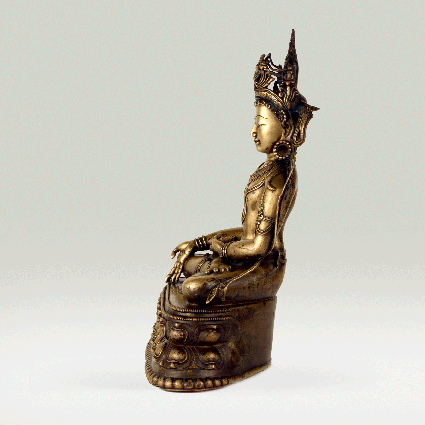 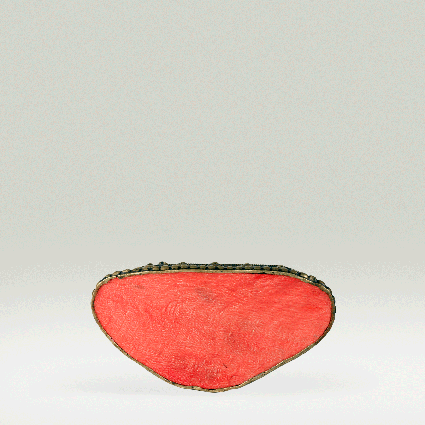 Description
Mythology
Iconography
Cast in one piece.
The urna, the lips and the jewelled ornaments are elaborately inlaid with copper and "silver".
The bottom of the pedestal is not sealed.

Ratnasambhava (Tib. Rin chen ’byung ldan) is seated in the diamond attitude (vajraparyankasana) on a double lotus pedestal with beaded borders. He displays with the right hand the gesture of charity (varada-mudra) and the left hand is placed in the lap. Ratnasambhava is clad with a cloth (dhoti) tied around the waist. He is covered with princely ornaments, namely a five fold crown with a kirttimukha emblem in the centre, in front of the tall knot of hair (jatamukuta) with a jeweled tip, a pair of circular earrings, two necklaces with attached pendants, ornaments at the upper arms, bracelets and anklets. The Buddha is encircled by an ornamented ribbon-like scarf .

InformationVenerated by:          VajrayanaAttributes:                Equality, EquanimityShakti:                       Mamaki Ratnasambhava is one of the Five Dhyani Buddhas (or "Five Meditation Buddhas") of Vajrayana or Tantric Buddhism. Ratnasambhava's mandalas and mantras focus on developing equanimity and equality and, in Vajrayana buddhist thought is associated with the attempt to destroy greed and pride. His consort is Mamaki and his mount is a horse or a pair of lions. CharacteristicsRatnasambhava is associated with the skandha of feeling or sensation and its relationship with consciousness. His activity in promoting Buddhism is enriching and increasing knowledge of Dharma. Ratnasambhava is associated with the jewel symbol, which corresponds with his family, Ratna or jewel. In artwork he is shown in the mudra of giving.He is usually coloured yellow or gold. He is associated with the element earth, the heavenly quarter of the south and the season of autumn. His cardinal direction is the south. ReferencesMythology of India: Myths of India, Sri Lanka and Tibet, Rachel Storm, Anness Publishing Limited, Editor Helen Sudell, Page 69, Column 1, Lines 9 - 18, Caption, Page 69, Column 4, Lines 1 - 4.Five Dhyani Buddhas Table 1, Row 4, Columns 1-5, Table 2, Row 2, Columns 1-12. Buddha RatnasambhavaThe Buddha Ratnasambhava is the purification of pride. Ratnasambhava is Sanskrit and the Tibetan name is sangay rinchenjungdan. The Tibetan word sangay means “buddha” and the word rinchen means “precious” referring to all precious, good, and immaculate things. The word jungdan means “the source.” So Ratnasambhava is the source of all good qualitieswith these precious qualities being the absence of pride. When ego and pride have been removed, one is open enough to actually receive all knowledge and qualities, that is the realization of Sangay Rinchen Jungdan. Knowing the meaning of Rinchen Jungdan, one understandswhy his activity encompasses the enrichment of all precious qualities of realization.
Ratnasambhava resides in the south and is yellow or gold in color. The color gold represents wealth and Ratnasambhava holds a wish-fulfilling jewel at his heart in his left hand. The wish-fulfilling jewel is a jewel which gives a person everything that he or she desires and so this alsosymbolizes enrichment. He is seated in the vajra posture of fulfilment on a horse’s throne representing the four bases or legs of miraculous powers that enables unobstructed passage everywhere. His right hand is in the mudra of giving supreme generosity, i.e., his activity is supreme generosity.