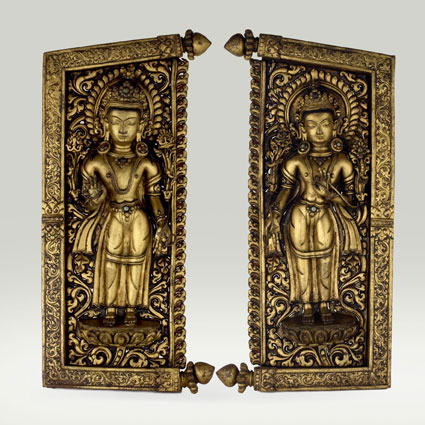 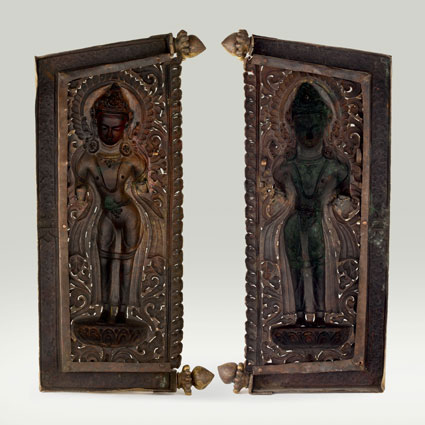 Description
Iconography
Gilt sheets of hammered copper; assembled from several parts and decorated with engraved ornaments.
The crowns and the other jewelled ornaments are inset with turquoise, coral and glass underlaid with red foil.

These images form a pair of male Bodhisattva deities composed of Vajrapani (Tib. Phyag na rdo rje) (left) and Manjusri (Tib. ’Jam dpal dbyangs) (right). The Bodhisattvas are standing in a slightly bent attitude (abhanga) on a single lotus pedestal. The right hand of Vajrapani is extended in the gesture of charity (varada-mudra) and the left hand lifted in the gesture of argumentation (vitarka-mudra). Manjusri has the right hand lifted in the gesture of argumentation (vitarka-mudra) and extends the left hand in the gesture of charity (varada-mudra). Both figures hold in the hands the stalk of a lotus flowering at shoulder levels and decorated with the appropriate attributes, namely the diamond sceptre (vajra) of Vajrapani, respectively the sword (khadga) of Manjusri.
The Bodhisattvas are clad with a cloth tied around the waists with a belt. They wear princely ornaments, namely five-pointed crowns, a pairs of earrings, two necklaces, bracelets at upper arms and wrists, and pairs of anklets. The Bodhisattvas are set against a background composed of scrolling patterns and the heads against a nimbus decorated with rays. Three sides of the brackets are composed of rectangular shaped bars with scrolling pattern and the remaining side with a flaming border.
Manjusri and Vajrapani, together with Avalokitesvara Padmapani, are the most popular ones among the Bodhisattvas.
This pair of embossed images originate from Southern Tibet and reflect a distinct Newar influence in the technique applied.
Vajrapani
Vajrapani (from Sanskrit vajra, "thunderbolt" or "diamond" and pani, lit. "in the hand") is one of the earliest bodhisattvas of Mahayana Buddhism. He is the protector and guide of the Buddha and rose to symbolize the Buddha's power. Vajrapani was used extensively in Buddhist iconography as one of the three protective deities surrounding the Buddha. Each of them symbolizes one of the Buddha's virtues: Manjusri (the manifestation of all the Buddhas' wisdom), Avalokitesvara (the manifestation of all the Buddhas' compassion) and Vajrapani (the manifestation of all the Buddhas' power)