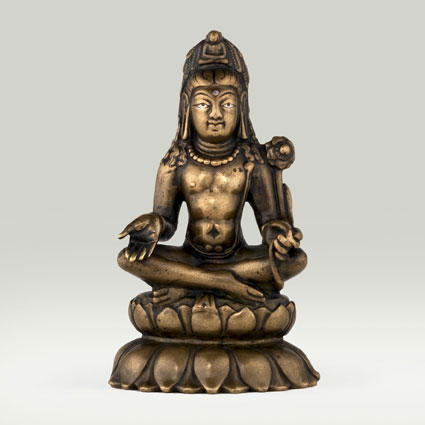 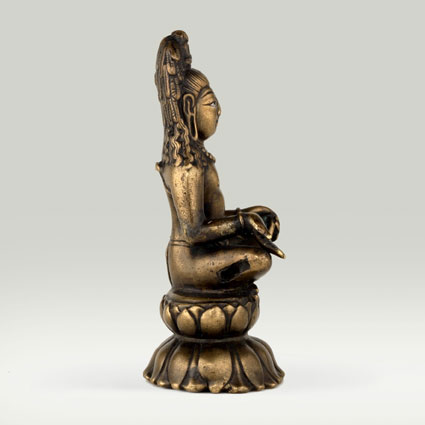 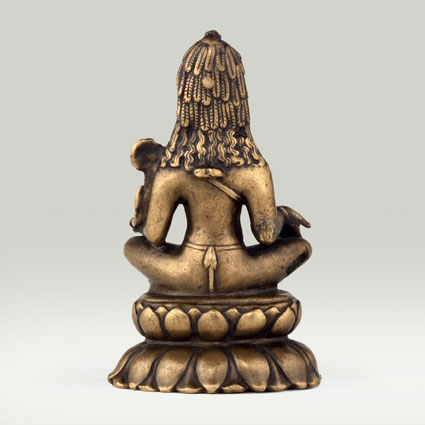 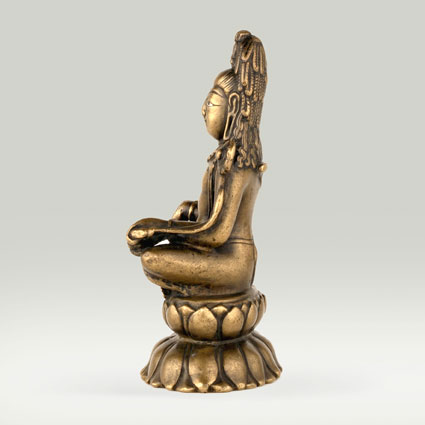 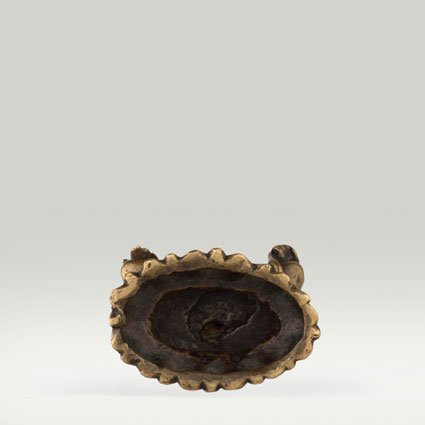 Hollow cast in one piece.
The separately cast aureole (prabhamandala) is lost.
The urna and the eyes and are inlaid with "silver" and the pupils are filled with a black lacquer-like paint.
The bottom of the pedestal is not sealed.
Padmapani is shown here in the siddhi-like ascetic form distinguished by long hair and few ornaments – restricted here to a beaded necklace, the “investiture with the sacred thread” (yajnopavita), and bracelets. Note the small effigy of the transcendental Buddha Amitabha attached to the matted crown of hair (jatamakuta).

The Bodhisattva, identified as an ascetic form of Avalokitesvara Padmapani (Tib. Phyag na padmo), is seated in a particular attitude on a double lotus pedestal composed of broad petals. He displays with the right hand the gesture of charity (varada-mudra) and holds with the left hand the stalk of a lotus flower (padma) attached to the left shoulder.
Padmapani is only sparsely clad with a narrow cloth (dhoti) between the legs, which is attached to a string worn around the waist. Note the small effigy of Amitabha attached to the matted hair (jatamukuta) with long strands falling over the shoulders and the back. Padmapani is shown here in the Siddhi like ascetic form distinguished by hair with long strands and few ornaments, restricted here to a beaded necklace, the “investiture with the sacred thread” (upavita) and bracelets. Jewelled forms of Padmapani in contrast always wear a crown and additional ornamentations.

In correspondence with modern terminology, all male Bodhisattva images with a lotus (padma) attribute, with or without an effigy of Amitabha in the crown or hair, are identified in this publication as  Avalokitesvara Padmapani (Tib. Phyag na padmo). In traditional Indian Sanskrit literature, this deity is variously named Lokesvara (SM 280; NSP 26), Lokesa (SM 83),  Avalokitesvara (NSP 2) or Lokanatha- standing (abhanga), in the diamond attitude (vajraparyanka), the noble attitude (sattvaparyanka) or the attitude of ease (lalitasana) (SM 8, 18, 19, 41).
Avalokitesvara
(From Wikipedia, the free encyclopedia)