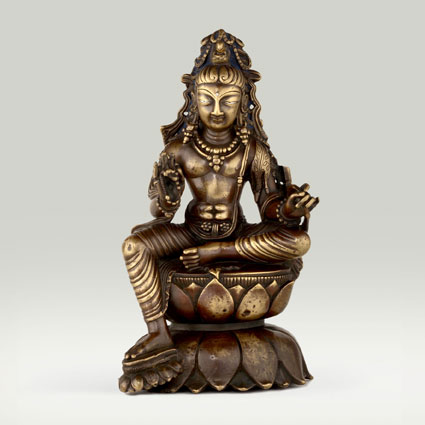 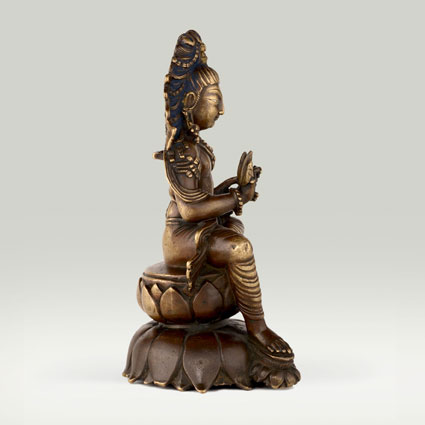 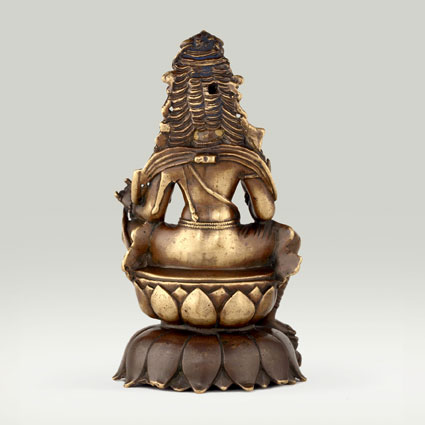 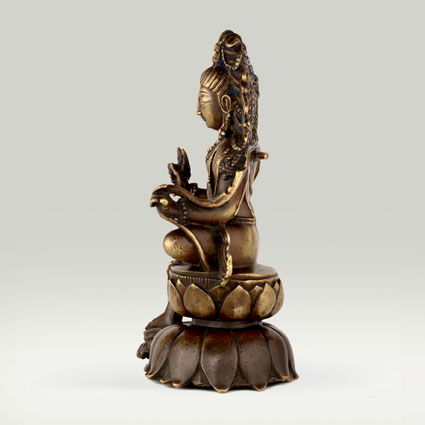 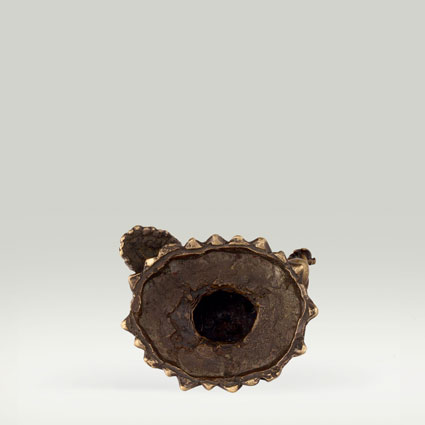 Hollow cast in one piece.
The separately cast aureole (prabhamandala) is lost.
The urna and the eyes are inlaid with "silver", and the pupils are filled with a black lacquer-like paint.
The face retains no traces of painted cold gold but the hair has traces of a blue pigment.
The bottom of the pedestal is not sealed.

The Bodhisattva, identified as an ascetic form of Avalokitesvara Padmapani (Tib. Phyag na padmo), is seated in the attitude of ease (lalitasana) on a double lotus pedestal composed of broad petals, and rests the right foot on a lotus flower (padma). He holds with the right hand displayed in the gesture of fearlessness (abhaya-mudra) a rosary (aksamala), and holds with the left hand the stalk of a lotus flower (padma) originally attached to the left shoulder, but now broken. Avalokitesvara is clad with a cloth modelled with folds and tied around the waist with a beaded belt and carries over the left shoulder the hide of an antelope. He wears jewelled ornaments, namely a pair of heavy earrings, two necklaces, a pair of bracelets, and the “investiture with the sacred thread” (upavita). Note the small effigy of Amitabha in the crown. Represented is one of the ascetic forms of Avalokitesvara, distinguished by long hair and rather few jewelled ornaments. There is a distinct difference between the ascetic and jewelled forms of Avalokitesvara. This image is one of the finest images of the Swat region to have survived.

In correspondence with modern terminology, all male Bodhisattva images with a lotus (padma) attribute, with or without an effigy of Amitabha in the crown or hair, are identified in this publication as  Avalokitesvara Padmapani (Tib. Phyag na padmo). In traditional Indian Sanskrit literature, this deity is variously namedLokesvara (SM 280; NSP 26), Lokesa (SM 83),  Avalokitesvara (NSP 2) or Lokanatha- standing (abhanga), in the diamond attitude (vajraparyanka), the noble attitude (sattvaparyanka) or the attitude of ease (lalitasana) (SM 8, 18, 19, 41).
Avalokitesvara
(From Wikipedia, the free encyclopedia)