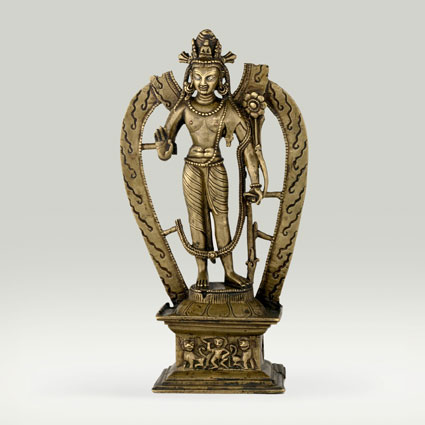 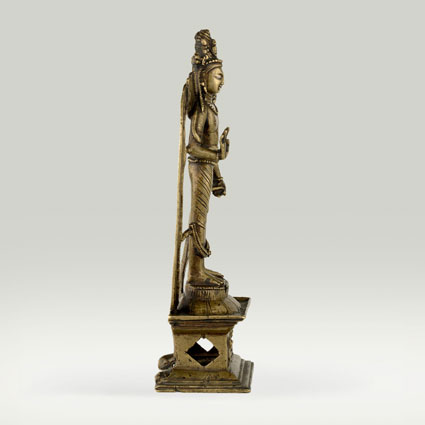 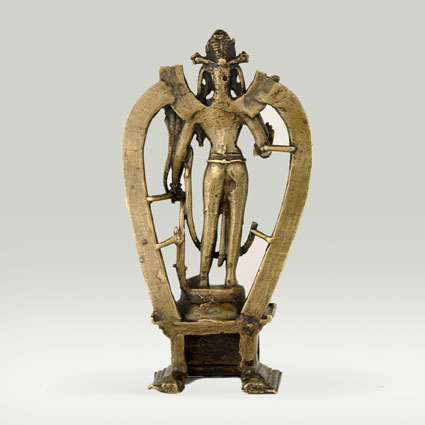 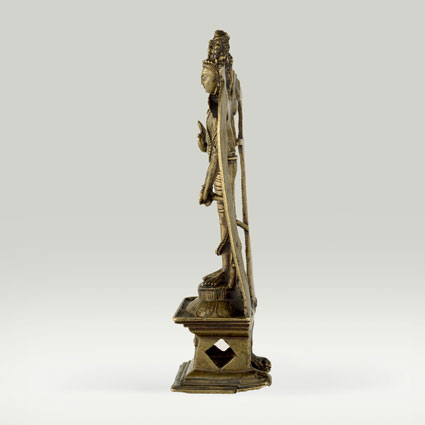 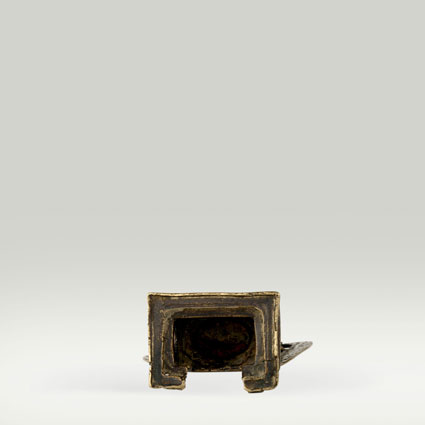 Hollow cast in one piece: figure closed, pedestal open worked.
The eyes are inlaid with ‘silver’ and the nipples with copper.
The garment is decorated with engraved ornaments.
The bottom of the open worked pedestal is not sealed.

The Bodhisattva, identified as Avalokitesvara Padmapani (Tib.: Phyag na padmo), is standing in a slightly bent attitude (abhanga) on a single lotus supported by a rectangular pedestal decorated with the figure of a dancing yaksaand a pair of lions (sinhasana). Padmapani displays with the right hands the gesture of fearlessness (abhaya-mudra) and holds with the left hand the stalk of a lotus flower (padma) attached to the left shoulder. He is clad with a cloth tied around the waist and fastened by a beaded belt and carries the hide of an antelope (ajina) over the left shoulder. He wears ornaments include a three-pointed crown, earrings, a beaded necklace, a pair of bracelets and the “investiture with the sacred thread composed of jewelled beads” (ratnopavita). He carries a long  garland of flowers (puspamalaor vanamala) around the shoulders. A small effigy of Amitabha is attached to the crown. The distinct nimbus and aureole decorated with rays (prabhamandala) are characteristic for the late Kashmir style of the 11th century.

In correspondence with modern terminology, all male Bodhisattva images with a lotus emblem (padma) and the effigy of Amitabha in the crown or hair are identified in this publication as Avalokitesvara Padmapani (Tib. Phyag na padmo). In traditional Indian Sanskrit literature this deity is variously named Lokesvara (SM 280; NSP 26), Lokesa (SM 83), Avalokitesvara (NSP 2) or Lokanatha- standing (abhanga), in the diamond attitude (vajraparyanka), the noble attitude (sattvaparyanka) or the attitude of ease (lalitasana) (SM 8, 18, 19, 41).
Avalokitesvara
(From Wikipedia, the free encyclopedia)