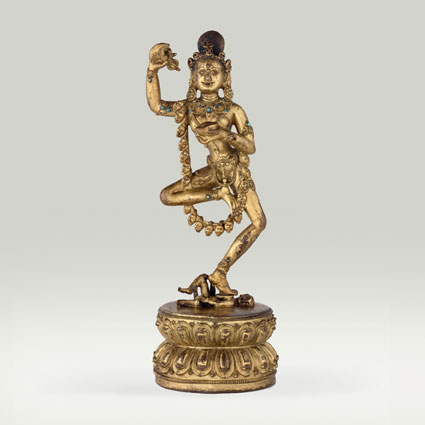 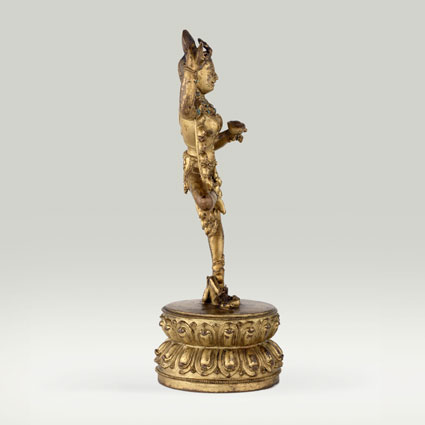 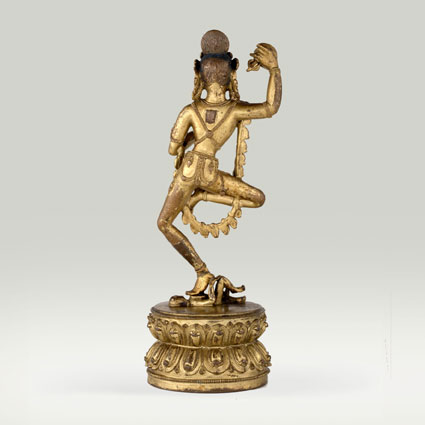 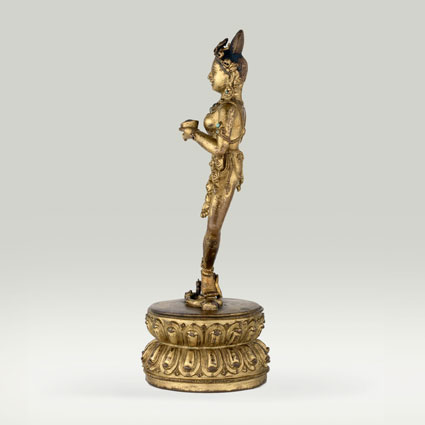 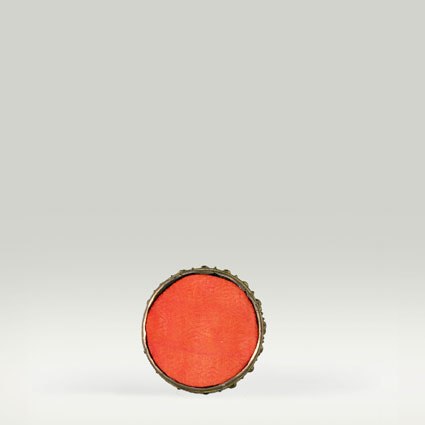 Description
Iconography
Cast in one piece, partly hollow.
The separately cast pedestal and the ceremonial staff (khatvanga) are lost.
The hollow cast upper torso of the goddess is sealed with a rectangular piece of gilt copper.

The three-eyed goddess, identified as Vajravarahi (Tib.: rDo rje phag mo), dances on her left feet (pratyalidha sana) and originally on corpses lying on a circular lotus pedestal. She is named after the excrescence in the shape of sow’s heads attached to the tall crown of hair, which, however, are not mentioned in any of the sadhanas. In the raised right hands she brandishes a ritual chopper with a vajrahandle (vajrakartrika), in the left she holds a skull-cups (kapala).The Dakini is naked except for the “five ornaments” (pancamudra) carved of bone and she wear a garland of severed heads (mundamala) around the neck.
This gilt statue is one of the most ecstatic representation of Vajravarahi or any other Dakini known. While following the description of the sadhana texts in every details, the artist succeeded in creating an image more exiting than any other published Vajravarahi. The sow’s heads attached to the tall crown of hair clearly demonstrates that the artist was a keen observer and combined a sense of humour with great craftsmanship obviously to the great pleasure of every viewer.

The Sadhanamala (SM) contains several descriptions of Vajrayogini (Tib. rDo rje rnal ’byor ma) (SM 123, 233, 236) which appears to be just another name of Vajravarahi (Tib. rDo rje phag mo) (SM 217–222, 224–227, 250–251, 255). The names Vajravarahi and Vajrayogini often apply to one and the same deity of the Hevajra cycle. In twenty-seven of the sixty-seven literary references to  rDo rje phag mo (Skt. Vajravarahi) contained in the bsTan ’gyur she is named rDo rje rnal ’byor ma (Skt. Vajrayogini). In this study, all two-armed goddesses dancing on the left foot with the right one lifted and bent (pratyalidhasana), holding with the right hand a chopper with vajra handle (vajrakarttrka) and with the left hand a skull-cup (kapala), are named Vajrayogini, and if they have the excrescence behind the right ear in the shape of a sow head they are named Vasya-Vajravarahi.
VajrayoginiVajrayogini or Vajravarahi (Tibetan: Dorje Naljorma, English: the Vajra yogini; also Tibetan: Dorje Phagmo, Wylie: rdo-rje phag-mo, English: the Vajra Sow) is a dakini, a tantric Buddhist yidam whose sadhana (practice) originated in India between the 10th and 12th century. She is often associated with triumph over ignorance as well as with abandonment (one of her hidden aspects is Varuni, Hinduist goddess of alcohol and intoxication). Vajrayogini is visualized as the translucent, deep red form of a 16 years old female with the third eye of wisdom set vertically on her forehead. She is often pictured with a sow and is an important deity for tantric initiation, especially for new initiates – Vajrayogini's practice is said to be well-suited to those with strong desirous attachment, and to those living in the current "degenerate age". Her consort is Chakrasamvara, who is often depicted as a spear on Vajrayogini's shoulder. Vajrayogini and her iconography are also closely associated with the Hindu goddess Chinnamasta.Vajrayogini is the yidamthat a meditator identifies with when practicing Six yogas of NaropaIn Tibet the abbess of Samding monastery, on the shores of the Yamdrok Tso Lake near Gyantse, was traditionally a tulku of Dorje Phagmo. The current incarnation resides in Lhasa.