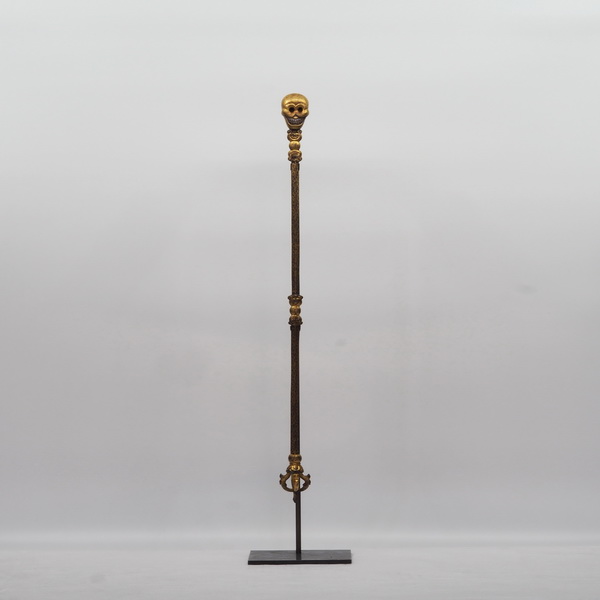 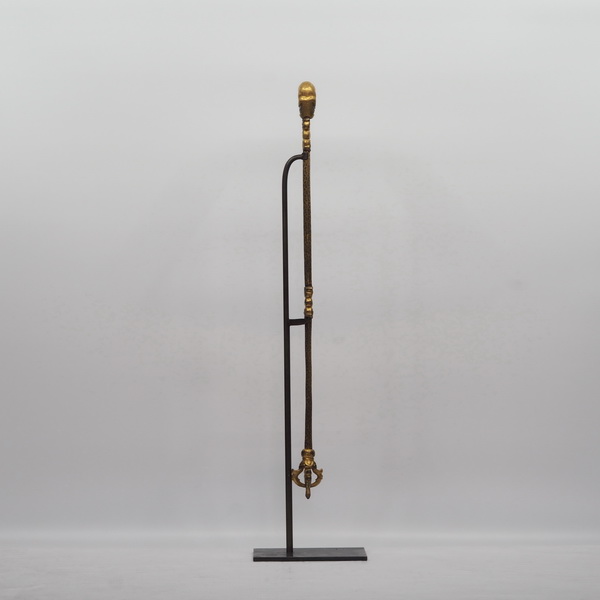 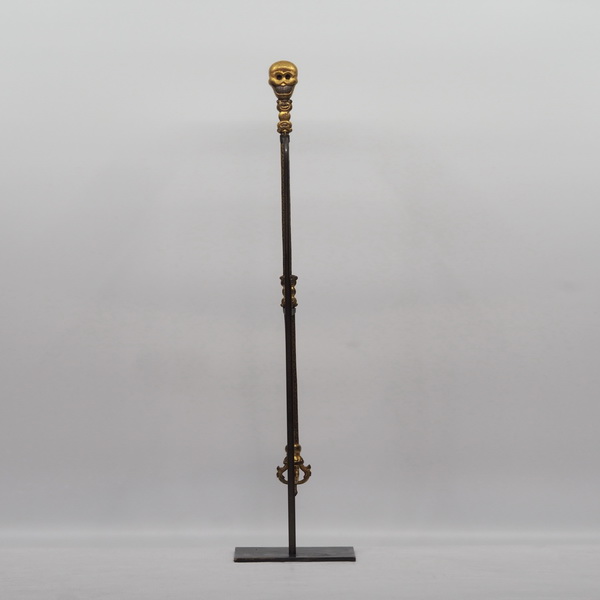 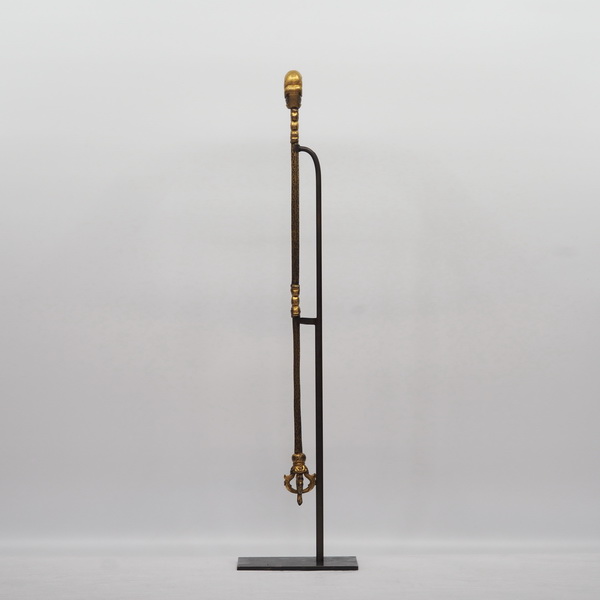 Description
Iconography
Sceptre with skull at one end and vajra at the other end.
Yama
Yama (Sanskrit), also known as Yamaraja in India, Yanluowang or simply Yan in China, and Enma Dai-Oin Japan, is the lord of death, first recorded in the Vedas. The name Yanluo is a shortened Chinese transliteration of the Sanskrit term Yama Raja, or "King Yama". Enma Dai-O is a further transliteration, meaning "Great King Yama", where Enma means Yama, Enma-O means Yama Raja and Enma Dai-O would be equivalent to Yama Maharaja.

Yama belongs to an early stratum of Vedic mythology. In Vedic tradition Yama was considered to have been the first mortal who died and espied the way to the celestial abodes, and in virtue of precedence he became the ruler of the departed. Yama's name can be interpreted to mean "twin", and in some myths he is paired with a twin sister Yami.

Yama from Tibet
Yama is a Lokapala and an Aditya. In art, he is depicted with green or red skin, red clothes, and riding a water buffalo. He holds a loop of rope in his left hand with which he pulls the soul from the corpse. He is the son of Surya (Sun) and twin brother of Yami, or Yamuna, traditionally the first human pair in the Vedas. He was also worshiped as a son of Vivasvat and Saranya. He is one of the Guardians of the directions and represents the south. He reports to Lord Shiva the Destroyer, an aspect of Trimurti. Three hymns (10, 14, and 35) in the Rig Veda Book 10 are addressed to him.

Naraka (Hindu)
Naraka in Hinduism, is compared to the Abrahamic concept of Hell. However, Naraka in Hinduism is not equivalent to Hell in Christian faith. Naraka is only a purgatory where the soul gets purified of sin by sufferings. In Hindu myth, there are many hells, and Yama, Lord of Justice, sends human beings after death for appropriate punishment. Such punishment can be in boiling oil, etc. Even Mukti-yogyas (souls eligible for mukti or moksha), and Nitya-samsarins (forever transmigrating ones in Dvaita theology) can experience Naraka for expiation.

Naraka (Buddhist)
Naraka is usually translated into English as "hell" or "purgatory". A Naraka differs from the hells of western religions in two respects. First, beings are not sent to Naraka as the result of a divine judgment and punishment; second, the length of a being's stay in a Naraka is not eternal, though it is usually very long. Instead, a being is born into a Naraka as a direct result of his or her previous karma (actions of body, speech and mind), and resides there for a finite length of time until his karma has achieved its full result.

Di Yu (Chinese mythology) and Jigoku (Japanese mythology)
Chinese Di Yu, Japanese Jigoku, literally "earth prison", is the realm of the dead or "hell" in Chinese mythology and Japanese mythology. It is based upon the Buddhist concept of Naraka combined with local afterlife beliefs. Incorporating ideas from Taoism and Buddhism as well as traditional religion in China, Di Yu is a kind of purgatory place which serves not only to punish but also to renew spirits ready for their next incarnation. Jigoku is similar, with Shinto concepts. These names are interchangeable with the concept of Naraka.

Yama and Ymir
In a disputable etymology, W. Meid (1992) has linked the names Yama (reconstructed in Proto-Indo-European as *yemos) and the name of the primeval Norse frost giant Ymir, which can be reconstructed in Proto-Germanic as *umijaz or *jumijaz, in the latter case possibly deriving from PIE *ym̩yos, from the root yem "twin". In his myth, however, Ymir is not a twin, and only shares with Yama the characteristics of being primeval and mortal. However, Ymir is a hermaphrodite and engenders the race of giants.

Yama in Iranian mythology
The parallel character in the Iranian mythology of Zoroastrianism is known as Yima Xsaeta in the Zoroastrian scripture of the Avesta. The pronunciation "Yima" is peculiar to the Avestan dialect; in most Iranian dialects, including Old Persian, the name would have been "Yama". In the Avesta, the emphasis is on Yima/Yama's character as one of the first mortals and as a great king of men. Over time, *Yamaxsaita was transformed into Jamsed or Jamshid, celebrated as the greatest of the early Shahs of the world.

Yama in Javanese
There is Yamadipati in Javanese culture, especially in wayang. Word adipati means ruler or commander. In the beginning Hinduism came to Java, Yama was still the same as Yama in Hindu myth. When Islam became majority religion, Yama was demystified by Walisanga who ruled at that time. So, in Javanese, Yama became a new character. He is son of Sanghyang Ismaya and Dewi Sanggani. In wayang story, Yamadipati married Dewi Mumpuni. Unfortunately, Dewi Mumpuni felt in love with Nagatatmala, son of Hyang Anantaboga who rules earth. Dewi Mumpuni left Yamadipati, finally.