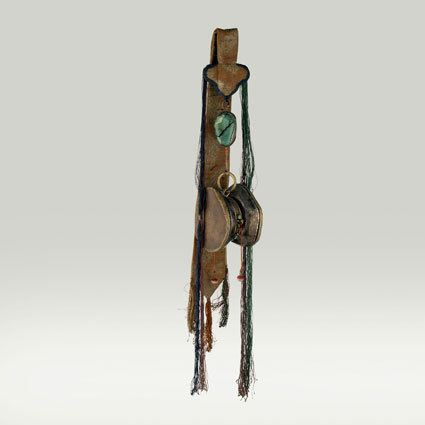 Description
Iconography
Various materials.
The damaru or “double drum” is a small drum shaped like an hourglass. Such double drums are employed in religious rituals in Tibet and Mongolia, and in all areas where Tibetan forms of Buddhism are practiced. The drum is held by its waist and twisted back and forth causing the pellets to strike in a rhythmic pattern. “Double drums” are most prominently used by the female practitioners of the Chö (cutting through)-tradition originating from India that is practiced in all orders of Tibetan Buddhism. Its goal is to sever the attachment to the ego. The practitioner visualizes his or her own dismembered body as an offering to various demons that symbolize the practicioner’s inner obstacles to be overcome. The sound of the damaru is conceived to invite the protective deities of the Buddhist teachings.
Damaru
(From Wikipedia the free encyclopedia)

A damaru is a small two-headed drum shaped like an hourglass. The drum is typically made of wood, with leather drum head, or made out of human skulls. Its height ranges from a few inches to a little over a foot. It is played one handed. The strikers are typically beads fastened to the ends of leathern cords around the waist of the damaru. Knots in the leather can also be used as strikers. As the player waves the drum using a twisting wrist motion, the strikers beat on the drumhead.

The damaru is well known throughout the Indian subcontinent. The Damaru is known as a power drum, and when played tends to bring spiritual energy. It is especially associated with the Hindu deity Shiva. One legend has it that Shiva gave the world its first syllabary as the sounds of the Sanskrit language arose from his drumbeats (see Shiva Sutra for the sounds). The damaru is used by itinerant musicians of all stripes, due to its small portable size. It is also used in Tibetan Buddhism in a ritual manner particularly with the trance sadhana of the Chöd.

The hourglass-shaped drum known in Sanskrit as "damaru" is a sacred instrument used in ritual shamanic performances in Mongolia, India and Tibet.

Its curved shape is a symbolic unification of yin and yang. Fashioned out of a human cranium, the drum is comprised of two skulls: a boy of sixteen and a girl of twelve. Monkey skins are stretched tightly over the skulls. One side is smeared with sperm, and the other side is decorated with a lotus blossom coated with a twelve-year-old girl's menstrual blood. The hide is then pierced with sixteen holes and attached to the drum with human hair. The whirling balls are made of the bones of a waterbird's foot and wrapped in wax and cloth.

The damaru drum is an ancient and spiritually potent symbolic medium for ritual music and magic used to communicate the intangible abstract other world through the senses.

In India, the damaru is so highly regarded as a spiritual instrument that everything to do with it is ritualized. It must even be correctly placed with the male skull to the musician's right and the female to his left in accordance with the traditional Yin Yang (masculine/feminine) order.