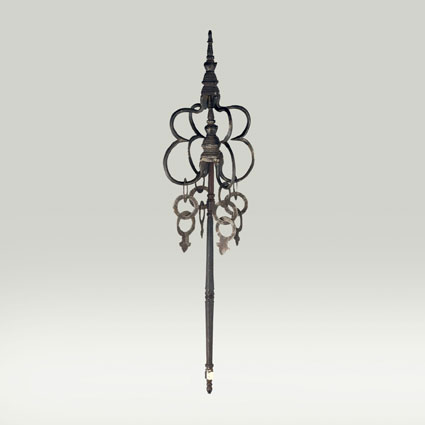 Sanskrit: khakkhara, literally "tin stick") is a Buddhist ringed staff used primarily in prayer or as a weapon. The jingling of the staff's rings is used to warn small sentient beings (i.e. insects) to move from the carrier's path and avoid being accidentally trodden on. Ringing also is used to alert the faithful that there is a monk within earshot in need of alms. The number of rings is determined by the status of the user though most shakujohave six rings which represent the six states of existence (Humans, Animals, Hell, Hungry ghosts, Gods, and Jealous gods).

In Chinese monasteries, the abbot of the temple usually wields the staff during grand ceremonies. The abbot would usually take the shakujoand strike the ground three times, symbolizing the breaking of ignorance.

The wooden shaft can either be long for use as a walking stick or short to accompany in chanting. As a staff, the shakujocould be wielded as a weapon, in Chinese wuxia novels the shakujois often the weapon of warrior monks, especially those of Shaolin Temple.