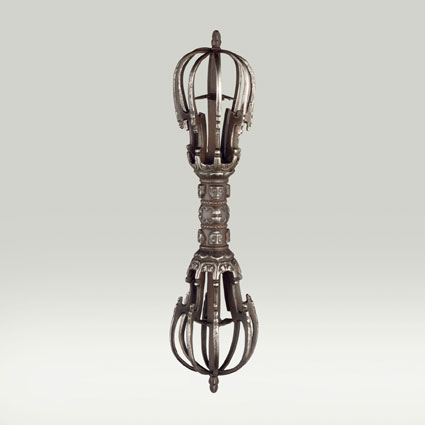 The vajra (Skt.) known in Tibetan as rDo rje («dorje») is generally interpreted as “diamond sceptre”. The vajra symbolizes the male principle; the transcendent diamond which cannot be destroyed, as a symbol of the spiritual path. This attribute is of great antiquity and originated in the West where it was known as a thunderbolt and was the attribute of Wotan and Zeus. In India the vajra was first associated with the Vedic deity Indra and later with the Buddhist Vajrapani.
Dorje
Vajras may have nine, five or three spokes. The spokes of a peaceful Vajra meet at the tip whereas those of a wrathful vajra are slightly splayed at the end. When paired with a bell their length can vary from four finger-widths to twenty-eight finger widths.