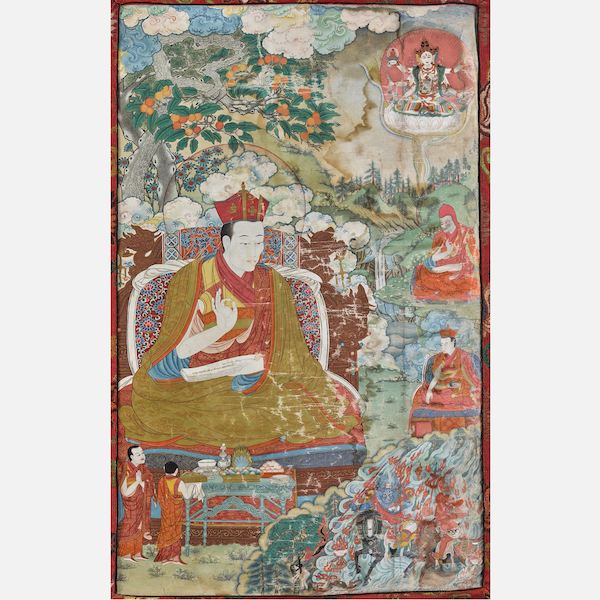 According to David Jackson, this paintings belongs to a set depicting the guru lineage of Karma bKa' brgyud Mahamudra, based on 18th century dPal spungs monastery originals.

(Formerly von Schroeder Coll.)
BiographyThe 4th Shamarpa: Shamar Chokyi Drakpa Yeshe Pal Zangpo (1453-1524)
The 4th Shamarpa was born in Kangmar in the Treshö province of Kham, eastern Tibet.
Wonderous signs were ablaze at his birth, which were variously interpreted by the local monastic communities, according to their own anticipation. Some were of the mind that it could only be the long-awaited Karmapa Incarnate, while others were more inclined towards the Shamarpa Incarnate or that of a Mahasiddhi. Seven months had passed, speculations abound; conclusions, there were none. The infant Rinpoche was invited formally to Tara Kangmar Monastery, where a collection of books was laid before him to select. He took none but works by the Karmapa. The indecisive took this to be unmistakably an indication of the Karmapa's return. Thus, the solemn matter of identification was settled arbitrarily on a simple test. From then on, the Shamarpa remained in the monastery.

The 6th Karmapa Tongwa Dönden was born the year after. When he was four years of age, he embarked on an extensive Dharma tour through Tibet. In due course, he arrived at the Lhündrup Gön Monastery in the south, not far from Dra-Kangmar, where, all the while, the disciples of the Shamarpa were anxiously waiting for their Guru's return, without avail. They came to the Karmapa, labourously recalling the passing of their Guru, whose last word was "Dra-Kangmar", they said. It was to be the name of the place of his next rebirth. The Karmapa reassured them that their Guru had indeed taken rebirth, but in distant Tre-Kangmar. Tre and Dra, an understandable confusion of words for his griefing followers, in time of stress. His now jubilant disciples planned on an instant return of their Guru to his long-awaited monasteries. The Karmapa told them it was not to be so. As the Karmapa, he must himself invite him, in full ceremonial honours, as befitting the return of the Shamarpa.

By the time the Dharma tour had reached the province of Treshö the Karmapa was seven years old. He set up camp near Kangmar, remaining in retreat, while he sent his gifted attendant-monk, to invite the Shamarpa. This learned monk, a man of exceptional realizations was none other than Paljor Döndrup, the 1st Gyaltsab Rinpoche, who was to become a Guru to the Shamarpa. When the Karmapa and the Shamarpa met, it was the renewal of a very close tie, stretching far beyond history. In terms of human relationship, it was to be compared to the joyful reunion of father and son. The Karmapa gave the young Shamarpa the name of Chöji Drakpa Yeshe Pal Zangpo. Returning the Red Crown, he enthroned him.They had been successively each other’s Guru up to then. The Karmapa proposed that from then on, they were to propagate the Dharma together, each in a different region of the country, with the Shamarpa remaining in the Kongpo area in the south while the Karmapa himself proceeding towards eastern Kham.Some years later, they were together again, at Treshö Kangmar. The Shamarpa arrived laden with offerings for the Karmapa; the Karmapa readily imparted to him the Mahamudra, the Six Teachings of Naropa and the numerous instructions of the Kagyü Lineage.
The Shamarpa became renowned as a great scholar and also for being unsparing on himself in practice, whether it was on the teachings received from the Karmapa, from Gyaltsap Rinpoche or from any of the great lamas and scholars, thus setting a challenging example of relentless perseverance.The 4th Shamarpa went as far as to Bhutan to propagate the Dharma. In southern Bhutan, there remains to this day a monastery built by the Shamarpa. It stands sturdy and almost untouched by the passing years. Apart from it being a shining testimony to the craftsmanship of the period, it is indelibly a mark of his enduring blessings. In central Tibet, where, at the insistence of the people, he became king for eleven years, ruling the country strictly in accordance with Buddhist principles. However, his first priority was Dharma. As he studied, so he taught and meditated, never neglecting his monastic obligations, thus fully accomplishing the three-fold task of a Holder of the Buddha's Teachings.