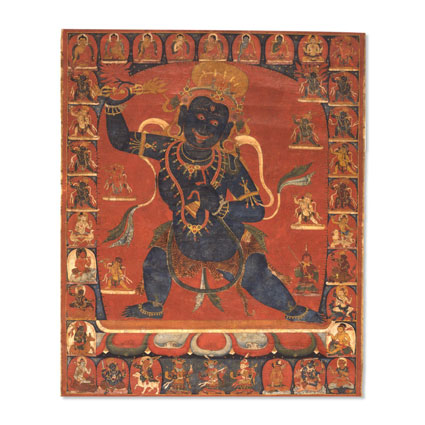 See it in the Museum
Emporium
Orientation 2
Wall object 3

Description
Iconography
This Thangka was discovered in 1998 AD in one of the caves located in the cliffs of the Yellow River in North-Eastern Tibet (Qinghai). This Thangka is one of special interest not only because it is one of the few known paintings of the Kokonor Tibetan culture, but also because of it is a rare tantric subject. Stylistically, this paintings shows a distinct influence of the later Pala tradition, something which is also visible in some of the paintings discovered at Khara-Khoto, a former Tangut frontier outpost of the Xia kingdom which lasted till the Mongol campain of 1226-1227.

The principal deity of this Tangka represents a form of Vajrapani (Tib. Phyag na rdo rje) usually represented with a diamond sceptre (vajra)in the right hand. The particular form of Vajrapani shown is characterized by holding in the left hand a prayer-bell with a vajrahandle (vajraghanta)in attition to the flaming diamond sceptre (vajra)in the right hand. This form of Vajrapani, surrounded by fourteen deities, presumably represents Nila-Vajravidarana (Tib. rDo rje rnam 'joms mthing ga) as perhaps transmitted by the Indian Siddha Acarya Savari (9th century). The four gate keepers correspond with the description of the 15-deity Nila-Vajravidarana Mandala as published in 1987 by bSod nams rgya mtsho, abbot of Ngor monastery (-1987). The description of the ten attendant deities by bSod nams rgya mtsho do only partly correspond with this painting. Consultations of other literacy references with regard to the 15-deity Nila-Vajravidarana Mandala may solve these discrepancies. The allocation of the matching textual reference will also reveal information about the sectarian affiliation of this Thangka.

In Sanskrit, Vajrapani is known as Vajrapanina bodhisattvena mahasattvena, vajra-sattva and, in Tibetan, as Lag na Rdo rje (Chana Dorji).

On the popular level, Vajrapani, Holder of the Thunderbolt Scepter (symbolizing the power of compassion), is the Bodhisattva who represents the power of all the Buddhas, just as Avalokitesvara represents their great compassion, Manjusri their wisdom, and Tara their miraculous deeds. For the yogi, Vajrapani is a means of accomplishing fierce determination and symbolizes unrelenting effectiveness in the conquest of negativity. His taut posture is the active warrior pose (pratayalidha), based on an archer's stance but resembling the en garde position in Western fencing. His outstretched right hand brandishes a vajra and his left hand deftly holds a lasso - with which he binds demons. He wears a skull crown with his hair standing on end. His expression is wrathful and he has a third eye. Around his neck is a serpent necklace and his loin cloth is made up of the skin of a tiger, whose head can be seen on his right knee.

The first representations of Vajrapani in India associated him with the Hindu God Indra. As Buddhism expanded in Central Asia, and fused with Hellenistic influences into Greco-Buddhism, the Greek hero Hercules was adopted to represent Vajrapani. He was then typically depicted as a hairy, muscular athlete, wielding a short "diamond" club. Mahayana Buddhism then further spread to China, Korea and Japan from the 6th century.

In Japan, Vajrapani is known as Shukongōshin ("Diamond rod-wielding God"), and has been the inspiration for the Nio (lit. Benevolent kings), the wrath-filled and muscular guardian god of the Buddha, standing today at the entrance of many Buddhist temples under the appearance of frightening wrestler-like statues.

"The origin of the image of Vajrapani should be explained. This deity is the protector and guide of the Buddha Shakyamuni. His image was modelled after that of Hercules. (...) The Gandharan Vajrapani was transformed in Central Asia and China and afterwards transmitted to Japan, where it exerted stylistic influences on the wrestler-like statues of the Guardian Deities (Nio)." (Katsumi Tanabe, "Alexander the Great, East-West cultural contacts from Greece to Japan", p23)