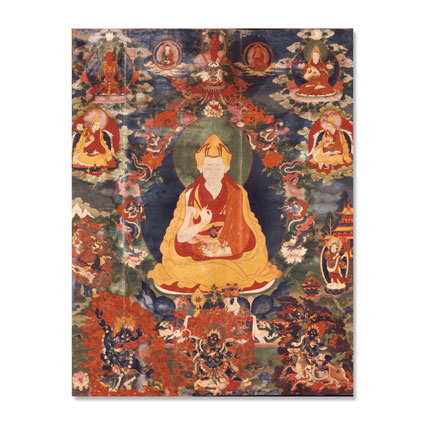 Rem. Like 18th gTsang-ris
Biography Lobsang Chökyi Gyaltsen (Tibetan: Blo-bzang Chos-kyi Rgyal-mtshan; ZWPY: Lobsang Qoigyi Gyaicain) (1570–1662) was the fourth Panchen Lama of Tibet, and the first to be accorded this title during his lifetime. Lobsang Chökyi Gyaltsen was the teacher and close ally of the Fifth Dalai Lama, Lozang Gyatso, called "the Great". The Fifth Dalai Lama gave Lobsang Chökyi Gyaltsen the monastery of Tashilhunpo as a living and declared him to be an incarnation of Amitabha Buddha (Tibetan: Ö-pa-me) and since then every incarnation of Amitabha has been the master of Tashilhunpo. When Lobsang Chökyi Gyaltsen died in 1662, aged 93, the Fifth Dalai Lama immediately began the tradition of recognising the reincarnation of Panchen Rinpoche. He composed a special prayer asking his master “to return” and ordered the monks of the great monasteries to recite it. He also reserved the title of Panchen (short for Pandita chen po or “Great Scholar”), which had previously been a courtesy title for all learned lamas, exclusively for him, and this title has continued to be given to his successors and, posthumously, to his predecessors starting with Khedrup Je. He was a prolific writer and teacher, composing more than three hundred works.