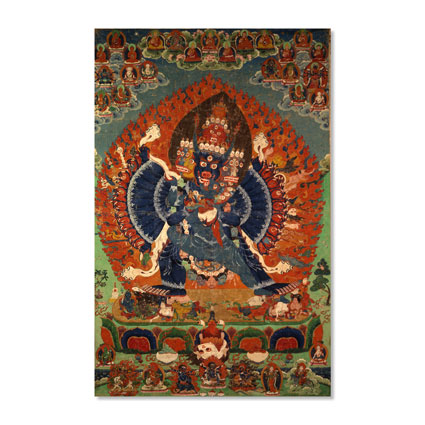 Mythology
Iconography
Yamantaka: The Conqueror of DeathYamantaka – Nepalese Sculpture Yamantaka, the ferocious emanation of Manjushri (Bodhisattva of wisdom) – is the most complicated and terrible of all the wrathful Buddhist divinities. Under this from he conquered the demon king of death, Yama, who was depopulating Tibet in his insatiable thirst for victims. According to this myth, in his paroxysm of insight, Manjushri traveled all the way to the underworld to seek out Yama, the God of death, who dwells with all his minions in the sealed up iron cities of hell. Yama appears in Indian mythology with the head of a water buffalo. To tame Yama, Manjushri adopted the same form, adding to it eight other faces and a multiple array of arms, each holding fearful and deadly weapons. He further sprouted a corresponding number of legs and surrounded himself with a vast host of terrifying beings. To confront death, he thus manifested the form of death itself, magnified to infinity. Death (Yama) saw himself endlessly mirrored back to himself, infinitely outnumbered by himself. Death was literally scared to death. Thus the yogi who meditates through the imagery of Yamantaka intends and hopes to develop a sense of identity strong enough to face down death, and the fear that attends upon it. Each head, each limb, each attribute, symbol and ornament of Yamantaka expresses the total mobilization of the faculties of enlightenment needed for this ultimate confrontation. Both Yama and Yamantaka are represented with bull’s heads, but Yama always has an ornament, shaped like a wheel on his breast, which is his distinctive mark.
Yamantaka
(from:vajrabhairava.com)

Yamantaka (Tibetan: Shinjeshe, Wylie: Gshin-rje-gshed) is a Mahayana Buddhist istadevata(tib. yidam) of the Highest Yoga Tantra class in Vajrayana, popular within the Geluk school of Tibetan Buddhism. Yamāntaka is seen as a wrathful manifestation of Manjusri, the buddha of wisdom, and in other contexts functions as a dharmapala.Yamantaka is a Sanskrit name that can be broken down into two primary elements: Yama, the name of the god of death; and antaka, or "terminator". Thus, Yamāntaka's name literally means "the terminator of death".Within Buddhism, "terminating death" is actually a quality of all buddhas as they have stopped the cycle of rebirth samsara. In this context, Yamantaka represents the goal of the Mahayana practitioner's journey to enlightenment, or the journey itself: in awakening, one adopts the practice of Yamāntaka – the practice of terminating death."Yamantaka" or "Shri Bhagavan Yamantaka" (Glorious Lord Making an End of Yama*) is another name for [Shri] Vajra[maha]bhairava, who is the highest emanation of Bodhisattva Manjushri. Bodhisattva Manjushri, Shri Vajrabhairava and Shri Bhagavan Yamantaka together represent the [Buddha]dharmakaya (Body of [Enlightened] Doctrine) which is also called Vajradhara (Holder of the Thunderbolt) because it holds to the pledge of the thunderbolt (vajrasamaya) which is the pledge to carry out the action of the Buddha.     * Yama is the name of the warden of hell. How does Yamantaka terminate death?This question depends upon the meaning ascribed to the term death – but one way in which this ability can be identified is through the enlightening activity of wisdom. The wisdom mind is able to perceive that death has no intrinsic, concrete existence: our understanding of death emerges solely from the conventions of the world. Also, when we achieve the same realisation of Yamantaka – who is a Buddha – then we have transcended death.There are three types of death spoken of in the Yamantaka Tantra:
1 Outer death is the regular end of life, which is embodied by Yama, Lord of Death, who resides in the south, seven stories under the earth.
2 The inner death is misknowledge of reality, which is instinctive clinging to objectively real objects and subjects.
3 The secret death is dualistic appearance on the subtelest level of clear light mind and illusory body. With the practice of Yamāntaka one overcomes those types of death and gains immortality as a buddha. Vajrabhairava/Yamantaka - An Introduction13 DeityIn Vajrayana Buddhism,Vajrabhairava, also known asYamantaka, is (1) a wrathful, buffalo-headed meditational deity (Tibetan: yi-dam) of the Highest Yoga Tantra class and/or (2) a dharma protector. Vajrabhairava is one of the principal three meditational deities of the Gelug school (T: gsang bde 'jigs gsum; the others are Chakrasamvara and Guhyasamaja). He is also one of the main yidams in the Sakya school where he comes in a variety of appearances (with different mandalas). In both schools Vajrabhairava is seen as the wrathful manifestation of Manjushri, the buddha of wisdom. In the other schools of Tibetan Buddhsim Yamantaka seems to be mostly revered as a protector. The (mostly secret and arcane) practices there involve different activities for various purposes. There are also some Yamantaka terma revelations in the Nyingma and Kagyu schools. We are only aware of the one practiced in the Drikung Kagyu tradition.

TerminologyIn Sanskrit "Vajrabhairava" stands for “Adamantine Terrifier”. Regardless which manifestation of Vajrabhairava you are looking at it he is always depicted as fear-inducing, scary, and intimidating. Not only is he terrifying to look at but – according to the Vajrabhairava Tantra – he also has conquered all evil spirits, including the Lord of Death, Yama. That's why he is also called "Yamantaka", the Slayer of Death. Depending on which manifestation of Yamantaka the Tibetans call him either "gSin-rje-gesed" or in the buffalo-faced aspect of Vajrabhairava "rdo-rje 'jigs-byed". It seems that the term "Yamantaka" (and "Yamari") is used in a more general way than "Vajrabhairava" which is restricted to the buffalo-headed yidam of the Gelug and Sakya schools. Sometimes the protector Kalarupa is called "Yamaraja" and comes as Outer, Inner, and Secret Yama – or Dharmaraja. In the Gelug school Yama – or Dharmaraja is part of the Vajrabhairava practice. Multiple Forms of Vajrabhairava/Yamantaka Vajrabhairava/Yamantaka EkaviraThe Ngor Mandala collection of the Sakya tradition alone lists 8 different forms/lineages of the blue/black buffalo-faced Vajrabhairava (which include the two Gelug ones) and 4 of red Rakta- or blue Krishna-Yamari (all without the buffalo head). Yamaraja is always blue/black. In the context of this website we are focusing on the two main forms practiced as meditational deities in the Gelug school.Appearance of Vajrabhairava Yamantaka comes in two forms: (1) as Solitary Hero (Ekavira), and (2) in union with his consort Vajravetali, called the "13-Deity Yamantaka" (because of the twelve more deities in his mandala). The attributes of the main deity are the same in both forms.

The basic two-armed (=sahaja) form of Vajrabhairava is blue-black in color, with the face of an extremely enraged buffalo; two sharp horns, with the flames coming from their tips. He has three red, blood-shot eyes; his breath swirls from the anger-creased nose in black clouds; his jaws wide agape with the four sharp fangs bared; the tongue flickering like lightning; the orange hair, eyebrows, and moustache bristling upward like the fire. The feet and palms of the hands are red, and the nails are like iron hooks. The two hands hold a curved knife above and a skull-cup below at the heart. ManjushriThe full form of Vajrabhairava has nine heads, the central one being that of a buffalo, and the top-most being that yellow Manjushri with a slightly wrathful expression. The three right faces are yellow, blue and red and the three left are black, white and smoky. Each face has three large round eyes, bared fangs and frightful expressions; brown hair flows upward like flames. He has thirty-four hands and sixteen legs. The first pair of hands hold a curved knife and skull cup to the heart. The remaining hands hold a multitude of weapons with the second and last set holding in addition the fresh outstretched hide of an elephant. He is adorned with bracelets, necklaces and a girdle all formed of interlaced bone ornaments, a necklace of snakes and a long necklace of fifty human heads. The right legs are bent pressing down on a man, animals and various gods. The left legs are extended straight and press upon eight birds and various gods; standing above a sun disc and multi-colored lotus completely surrounded by the orange flames of pristine awareness.When in union with his consort Vajra-vetali (Skt. for “Adamantine Ghoul”; T: rDor-rje ro-lans-ma) she has one face and two hands, is blue in color with orange hair pressed against the back, and holds a skull cup in her left hand.Meaning Anuttara Yoga Tantra is divided into father- (T: pha-rgyud) and mother-tantra (T: ma-rgyud). The former emphasizes practices involving the energy-winds for arising in subtle forms known as illusory bodies (T: sgyu-lus), which are the immediate causes for achieving a Buddha's body of forms (T: gzugs-sku, Skt. rupakaya). The latter gives more detail about practices to access clear light mental activity (T: 'od-gsal) and focus it with blissful awareness on voidness, as the immediate cause for achieving a Buddha's omniscient awareness or dharmakaya (T: chos-sku). The Vajrabhairava Tantra belongs to the father tantra using negative emotions such as anger and hatred as the path. Vajrabhairava is powerful enough to overcome and subdue even the most powerful negative emotions. Visualizing oneself in this highly energetic form of the yidam is said to help conquer and transform such negative emotions: "Like other wrathful deities, Yamantaka gives the forces of the Shadow [in the Jungian sense] a symbol that hooks their energy and provides a channel and direction for their expression and transformation" (Preece, p. 187).

Lalitavajra
All Buddhist textual sources refer to Lalitavajra as the revealer of the Vajrabhairava and Yamari tantras to an originally Indian tantric audience. Lalitavajra, a 10th-century scholar from the Nalanda monastery in Bihar whose main yidam was Manjushri, one day had a vision of the deity telling him to go to the land of Oddiyana and retrieve the tantras of Yamantaka. He went there and encountered the Wisdom-dakini (in the form of Vajra-vetali) and other dakinis who eventually revealed the various Yamantaka tantras to him. They refuse to let him take the texts with him; he was only allowed to memorize as much as he could in a short time and then write it down upon his return.
Siklos (pp.5-10) gives a fascinating analytical account of the origins of the Vajrabhairava Tantra pointing towards the non-Buddhist Shaivite tradition in Western India (Kashmir & Afghanistan). The name "Bhairava" indicating one of Shiva's main forms and the various attributes/implements like the trident, tiger-skin, ashes, drum (Skt: damaru), etc. suggest the same.

Practice
Tsongkhapa, the founder of the Gelug school, emphasized and promoted the practice of Vajrabhairava. Consequently, the practice became one of the three principal tantras taught at the tantric colleges and monastic universities. To this very day it is considered one of the most important yidam practices – for monastic and lay practitioners alike. The principal practice texts come from Tsongkhapa (13-Deity) and Pabongka (Solitary Hero). Both practice texts are available in English translation on this website. Important historical commentaries were written by Tri Gyaltsen Senghe (for the Solitary Hero) and Lhundup Pandita (for the 13-Deity) practice; both have been translated. Most of today's commentary teachings are based on the former. Commentary teachings and retreats are held in regular intervals around the world.