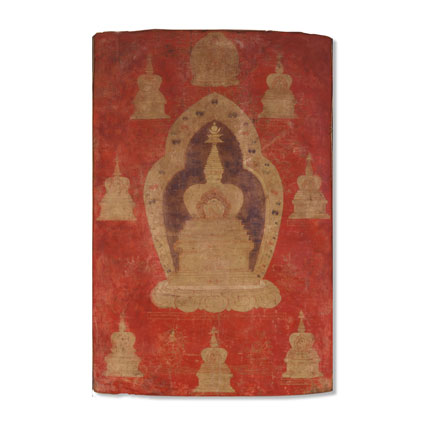 Introduction
Giuseppe Tucci wrote a very scholarly piece on stupas I was given many years ago. In the interests of simplicity (and avoiding copyright infringements) it is distilled as follows:
There are two reasons stupas were built after the historical Buddha Shakyamuni died:
* To commemorate eight great deeds accomplished during his life
* To enshrine relics after he passed away

The Eight Great Deeds
1. Birth:Built at Lumbini
2. Enlightenment: Built in the kingdom of Magadha, on the banks of the river Nairanjana
3. Turning of the Wheel, the first teaching: Built at Sarnath (Varanasi)
4. Miracles: Built at Sravasti
5. Descent from Tushita: Built at Samkashya after Buddha returned from Tushita heaven, where he'd gone to give teachings to his mother
6. Reconciliation: Built at Rajagriha, after Buddha reconciled the disagreements of the monks
7. Complete Victory: Built at Vaishali, where Buddha meditated extensively
8. Parinirvana: Built at Kushinagara where Buddha entered mahaparinirvana

Enshrining Relics
When he ended his earthly life, and his mortal remains were cremated, his ashes – thus it has been said – were divided into eight parts which were closed up and protected by the princes and communities. Or ten, or eleven, according to different traditions. More stupas were built over these relics. Of the really old stupas still intact today, most are said to contain relics of the Buddha.

In Tibet, the construction of stupas (mchod-rten, pronounced chor-ten) came to be an intregal part of the spiritual life. The symbolism is so vast and complex it is slightly ridiculous to attempt any simplification of it. Every part of the outwardly visible stupa has specific significance, yet this is only the surface: within are scriptures and relics in defined positions, each equally alive with symbolic meaning.
To start at the very beginning: generosity is the first of the 10 perfections, and within the different categories of giving, none is higher than the giving of Dharma(sometimes translated as Law or Truth). As the stupa represents the enlightened mind, the person who contributes to the construction..."who gives, who sacrifices something of his wealth, of his person or of his very desires, makes an act of renunciation and succeeds, at least in that very moment, in putting others before himself." (Tucci)
So in building a stupa, or contributing in any way towards one, is considered a “good thing” by Buddhists in general. It is a structure that invites (or even invokes) peace. Not being a very structured person, here's a cheerful mixing up the discussion of history, art, symbolism and the benefits of stupas. Robert Thurman / Denise Leidy say: "Stupas began in pre-Buddhist India as hemispherical burial grounds that marked the remains of temporal rulers. At an early stage in the development of Buddhist art, they became symbols of the Buddha's continuing immanence as well as representations of his mind........the fourteen rings around the spire (that are seen in all "modern" stupas) are all that remain of the royal umbrellas often found in earlier stupas. They symbolise the fourteen stages traversed in the attainment of buddhahood; the four tantric stages added to the ten bodhisattva stages." (This quote is from "Mandala The Architecture of Enlightenment", by Denise Leidy and Robert Thurman, Asia Society Galleries & Tibet House)

Amongst my collection of stupa stuff is an untitled section of symbolism which starts with this quote from His Holiness Dilgo Khyentse, Rinpoche: "This stupa is called a dharmakaya stupa. Within it, the guru dwells unchanging. The Buddha said that whoever sees a dharmakaya stupa will be liberated by the sight of it. Feeling the breeze nearby the stupa liberates one by its touch. The sound of the tinkling of the small bells hanging on the stupa liberates one by their sound. having thus seen or experienced this stupa, by thinking of one's experience of it, one is liberated through recollection."
The piece continues: "The stupa that enshrines the teacher's physical remains is at once a reminder of the teacher and the embodiment of the pure and all-pervasive aspect of the awakened state. As His Holiness Dilgo Khyentse Rinpoche has said: "When a great being passes away, his body is no more. But to indicate that his mind is dwelling forever in an unchanging way in the dharmakaya, one will erect a stupa as a symbol of the mind of the budhhas."