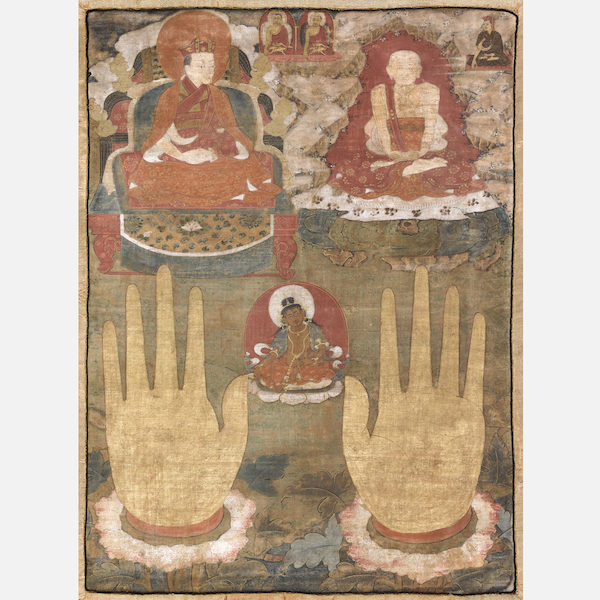 At the top left corner is a red hat lama seated upon a throne, a carpet and a cushion. Cladded in a heavy brocade cloak and religious outfit, he apparently rests with his legs crossed in vajraparyaṅka, his two hands in contemplation gesture. His red hat with golden rims, cloud patterns and a viśvavajra could identify him as a Shamar (Tib. zhwa dmar) incarnation. Nevertheless, we know examples of portraits of Shamar lamas with the triratna symbol instead of the double vajra[1]
If we follow David Jacskon’s statement regarding the shape and ornaments of the Kagyu hats[2], since the cloud-emblems are pointing forward, it should be considered as the Gyaltsab’s hat (Tib. rgyal tshab). Yet, many examples prove that the regularity in artistic representations is far from being the rule[3].
Moreover, the absence of visible inscription remains a problem for his identification.
Facing him is another master, with a bare shaved head, wearing the religious robes and practicing yoga exercises. Although residing in a snowy mountain cave, the upper half of his body is naked – sign of his realization of the inner heat – and he sits straight in vajraparyaṅka posture with his two hands in dhyānamudrā, a meditation belt (Tib. sgom thag) across his chest.
A worn out inscription partially erased reads: sangs [rgya]s mnyan pa
Sangye Nyenpa Tashi Paljor (Tib. sangs rgyas mnyan pa bkra shis dpal ‘byor) (1445/57- 1510/25) was a great siddha, disciple of the 7th Karmapa and first in the line of the Sangye Nyenpa’s incarnations. He is most famous for being one of the main teachers of the 8th Karmapa Mikyö Dorjé (Tib. mi bskyod rdo rje) (1507-1554)[4].

Above him to his right are two identical Buddhas in bhūmisparśamudrā, sharing the same lotus seat. The one on the right bears a small inscription that reads: [mtshan] dpal shin tu yoṇs [yongs] grags
This is the name of the 29th of the 35 Buddhas of confession (Skt. Suparikīrtitanāmagheyaśrī)[5]. No inscription is visible near the other Buddha.
To the left of Sangye Nyenpa is a master, dressed with a dark monastic garment. He wears a red hat with long flaps covering his neck. This element could identify him as Gams po pa bSod nams rin chen (1079-1153) whose specific hat “dwags zhu” has a similar shape[6].
The end of a small inscription is placed under his seat: [...rin] po che.
If this master is Gampopa, the inscription could be “Dwags po rin po che”, one of his epithets.
A small representation of the wealth deity Jambhala sits at the feet of the masters. Of golden color, he holds a bijapuraka fruit in his right hand and the neck of a jewel-spitting mongoose in his left. He is represented in his traditional way, with the prominent belly of a yakṣa, wearing the Indian royal attire of the saṃbhogakāya. As Jeff Watts explains[7], “yellow Jambhala is commonly found as a minor, or secondary, figure in paintings, generally included in the lower portion of a composition above or next to the Dharma protector figures.”
Despite appearances, this statement could correspond to our case. Indeed, if Jambhala is almost geometrically located in the middle of our canvas, when taking in consideration the composition of the painting, he seats on the green area representing the ground, whereas the two handprints our “out of the frame”, resting on lotus flowers coming out of a pool. By making abstraction of the hands as present “on the ground” of the natural environment, Jambhala occupies the lower range of the thangka, a place devoted to protectors and wealth deities.

The back of the painting is inscribed in Tibetan dbu med script, a semi-cursive writing.
Two inscriptions in Sanskrit are placed above a four line prayer in Tibetan: Nama śśrī [śrī] mangala bhuta [buddha] ye.
This could be interpreted as a Sanskrit salutation formula towards the Buddha “Homage to the glorious and auspicious Buddha” and also as a reference to the teacher Sangs rgyas (Buddha) [mnyan pa] bkra shis dpal (śrī mangala) [‘byor] represented on the opposite side.

Namo ratna tra [yā] ya
This “salutation to the Three Jewels” comes from the Akṣobhya mantra. The Tibetan equivalent to “ratna tra” in Tibetan is dkon mchog gsum but it does not seem to be connected to any personal name in our case.

Having abandoned this body for the intermediate state of becoming / And recognized the very nature of the saṃbhogakāya pure realm, / Guiding all the sentient beings of the bardo without refuge, /
Bless us that we can obtain the two accomplishments! /

According to this prayer, the dedicatee has already left his body to join the realm of saṃbhogakāya and he is required to guide the sentient beings in the bardo. It seems these verses were composed after the death of a master.

In many ways, this thangka is original, beginning with its general disposition. Despite the overall balance of the composition, we find different elements of asymmetry. The red hat lama sits on a throne, partially turned away with his face in profile, while the master on the right is facing us, seating in meditation posture inside a rocky cave amidst snow peaks surrounded by two Buddhas and a lama.
Another puzzling feature is the presence of the handprints alone. When compared to similar paintings of hands and footprints, we see that most of the thangka of this type represent either hands and feet together or feet only. Moreover, they usually include the master’s portrait and/or a yidam deity [images 02, 03 & 04]. No example comparable to ours can be found on the HAR website, in the Essen Collection or in the other publications consulted.
Few explanations are given regarding this practice. According to the Himalayan Art Resource this kind of painting originated within the Kagyü school, following the instructions of Gampopa[8].

The identity of the hands “owner”

The presence of these two portraits of masters above the handprints leaves a limited number of possibilities of interpretation regarding the identity of the person whose hands are being reproduced. They could either belong to one of them or to a third person connected to them, logically a disciple. Let us not forget that, considering the context, they can only be the hands of an important religious figure.
If they belong to one of the two masters depicted above, why portraying them of equal size? This way of representing lamas facing each other is very common among the lineage paintings, like the portrait of Sangye Nyenpa and Mikyö Dorjé from the Rubin Museum collection [05]. This disposition illustrates the teacher-disciple relationship between the protagonists.

If it was the case for our painting, it would imply the same relation between the red hat lama and Sangye Nyenpa. The problem is the sources available on his life[9] make no mention of a Shamar, Situ or Gyaltsab incarnation being among his teachers. The only important figures are the 7th Karmapa Chödrak Gyatso (Tib. chos grags rgya mthso) (1454-1506) and other masters as Bengar Jampel Sangpo (Tib. ban sgar ‘jam dpal bzang po).
The possibility of the hands belonging to the red hat lama is also problematic since the only famous disciple known to Sangye Nyenpa is the 8th Karmapa and none of the three red hats incarnations cited above.
The hypothesis of the hands belonging to a character having no direct relation with Sangye Nyenpa and the red hat lama seems improbable considering the apparent absence of connection between these two lamas in terms of transmission. Therefore, the third theory of a common disciple to both of them appears acceptable.
Since only Sangye Nyenpa is clearly identified and since he is famous for being a great siddha and the principal master of the 8th Karmapa Mikyö Dorjé[10], we can reasonably attribute the handprints to the latter.
If so, the red hat lama should be of the same period, another remarkable figure directly involved in the religious education of the 8th Karmapa. The accounts on his life presented in
Douglas and White, the Treasury of Lives website and on TBRC[11] explain that the 3rd Situ Tashi Paljor (Tib. bkra shis dpal ‘byor) (1450-1497) and the 2nd Gyaltsab Tashi Namgyal (Tib. bkra shis rnam rgyal) (1490–1518) played an active role in his recognition and enthronement. The 4th Shamar Chökyi Drakpa yeshe pal sangpo (Tib. chos kyi grags pa ye shes dpal bzang po) (1453-1524) did not seem to have been of great importance regarding the 8th Karmapa and is not cited as a teacher.
Based on these facts, the red hat master would either be the 3rd Situ or the 2nd Gyaltsab. Following this hypothesis, and if the painting is contemporary of Mikyö Dorjé the only possibility would be the 2nd Gyaltsab Tashi Namgyal.
Indeed, the Situ line of incarnations did not have any hat prior the 5th Situ Chökyi gyaltsen Palsang (Tib. chos kyis rgyal mtshan dpal bzang) (1586–1657) who received it from the hands of the 9th Karmapa Wangchuk Dorjé (Tib. dbang phyug rdo rje)[12].
The brief account on Mikyö Dorjé’s life given in Douglas and White places the passing of the 2nd Gyaltsab and Sangye Nyenpa relatively close in time but without giving any precise date. According to the other sources, Gyaltsab died in 1518, and Sangye Nyenpa in 1525 (the date of 1510 appearing contradictory with the general timeline). In our hypothesis, this painting could have been realized after the death of Mikyö Dorjé’s second teacher Sangye Nyenpa, e.g. between 1525 and 1554.
The elegiac poem on the reverse of the painting with mentions of “abandoning the body”, “intermediate state” and “recognizing the nature of saṃbhogakāya” could correspond to this theory.
From a stylistic perspective, if the painting was indeed commissioned during Mikyö Dorjé’s life, the famous Karmapa Encampment Style (Tib. karma sgar bris) was not yet developed or just about to do so.
All the sources present Namkha Tashi (Tib. nam mkha’ bkra shis) (16th century) as the initiator of that tradition. In his account on Kongtrul’s Development of Tibetan Artistic Styles, Gene Smith[13] questions the possibility of Namkha Tashi being a disciple of Mikyö Dorjé, information confirmed by TBRC. Jackson[14] explains that “as a small child he is said to have been recognized as an “emanation” of the 8th Karmapa Mi-bskyod-rdo-rje (1507-1554)” he further says that he was the 9th Karmapa contemporary.
Nevertheless, stories of his apprenticeship clearly establish that he was formed in the Menri (Tib. sman bris) style before progressively creating his own[15]. Other connections are established between Karmapa tradition and the Menri style, with one of the early painters of this tradition receiving instructions from Mikyö Dorjé and working under the 4th Shamar patronage[16].

Regarding the general timeline, our painting should belong to this evolving Menri style at the transition with the Karma Gardri. Stylistically, it corresponds to the description given by Jackson and Boyer[17] with Chinese landscape, blue and green dominant, rocks with gold lining, asymmetric composition and the remaining influence of an earlier style and manner with Indian and Newari elements through the representation of Jambhala, the two Buddhas and Gampopa.