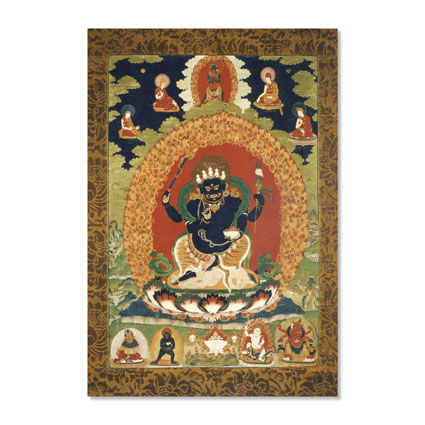 Description
Iconography
In center of the thanka is the four-armed Mahakala, as depicted in the Kargyü and Gelugpa tradition. His attributes are the sword, a black fruit, a kapala and trishula.

Up in the middle is Mahakala in his Yidam aspect. He is the two-armed and dark Cakrasamvara with red consort Vajrayogini .
On the left sit the important lamas: Tewo Tschö gi Gyatso,  Nyagala Panchen and right Dschatröl Tschog Lanamo and Nyeljor gi Wangchuk Lha Wangtags Lanamo.
Below, from left to right, the wealth-deities are depicted:
* yellow Jambhala and mongoose
* nude black Kalajambhala
* in the middle tantric sacrifice: five sensory organs
* Sitajambhala on a water dragon
* six-armed and three-faced red Jambhala
Mahakala
(From Wikipedia, the free encyclopedia)