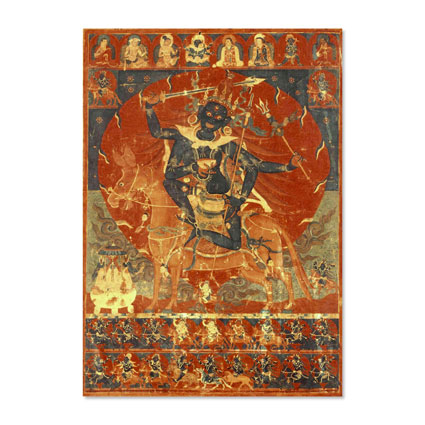 See it in the Museum
Emporium
Orientation 2
Wall object 5

Description
Iconography
Dhumavas sri-Devi or the “Smoke-Clad-Lady” is surrounded by four attendant goddesses, and eighteen additional ones at the two bottom. The register at the top of this bKa’ brgyud («kagyü») painting shows a lineage with six masters, among them Naropa) (956–1040) and Marpa (1012–1097).

An identical image is illustrated on a xylograph of the Narthang Pantheonand a painted copy of it, identified in both cases by the Tibetan inscriptions as lHao mo dud sol ma (Skt. Dhumavati Devi) However the description by Nebesky-Wojkowitz of the goddess named in his text dPal Idan Iha mo dud gsol does not fully correspond with the published illustrations mentioned above. According to him the goddess who is also adressed as gTso me remati, among numerous other titles, holds in the upper right hand a chopper (kartrika) and not a sword (khadga) as in the illustrations of the publications. The attributes in the left hands are described as a weapon called shagti, and a trident (trisula) with streamers attached.

Nebesky-Wojkowitz futher states that a human corpse lies in her mouth, which does not correspond with the published illustrations.

The Dhumavas Sri-Devi (Tib. dPal Idan lha mo dud gsol ma), or the "Smoke-Clad-Lady" is surrounded by four attendant goddesses, with eighteen additionnal ones painted in the two bottom registers.

The registre at the top of the painting shows a lineage of Vajradhara and seven (?) teachers:

MANQUE LA LISTE DES ENSEIGNANTS
Palden LhamoPalden Lhamo (pronounced: 'Pelden Lhamo'), Panden Lamo (Wylie transliteration: dPal ldan Lha mo), Shri Devi (Sanskrit), or Okkin Tungri (Mongolian) is a protecting Dharmapala of the teachings of Gautama Buddha in the Gelug school of Tibetan Buddhism. She is also called Remati. She is the wrathful deity considered to be the principal Protectress of Tibet.Palden Lhamo is the consort of Mahakala and has been described as "the tutelary deity of Tibet and its government", and as "celebrated all over Tibet and Mongolia, and the potent protector of the Dalai and Panchen Lamas and Lhasa."  Palden Lhamo and the lake Lhamo La-tsoIt is said that Palden Lhamo, as the female guardian spirit of the sacred lake, Lhamo La-tso, promised Gendun Drup, the 1st Dalai Lama in one of his visions "that she would protect the reincarnation lineage of the Dalai Lamas." Ever since the time of Gendun Gyatso, the 2nd Dalai Lama, who formalised the system, the Regents and other monks have gone to the lake to seek guidance on choosing the next reincarnation through visions while meditating there.The particular form of Palden Lhamo at the lake Lhamo La-tso is Gyelmo Maksorma, "The Victorious One who Turns Back Enemies". The lake is sometimes referred to as "Pelden Lhamo Kalideva", which indicates that Palden Lhamo is an emanation of the goddess Kali, the shakti of the Hindu god Siva. Gyelmo Maksorma (rGyal mo dMag zor ma) or Machik Pelha Shiwai Nyamchen (Ma gcig dPal lh Zhi ba'i nyams can) is an unusually peaceful form of Palden Lhamo.The mountain to the south of Chokorgyel Monastery, Shridevi, is the "blue" residence of the Protectress Palden Lhamo on which a dundro or sky burial site is located. The monastery was originally built in a triangular form to reflect the symbolism of its position at the confluence of three rivers and surrounded by three mountains and also represents the conjunction of the three elements of water, earth and fire, as well as the female principle of Palden Lhamo in the form of an inverted triangle. Traditional accountsIt is said that, during the reign of Songtsen Gampo (605 or 617? – 649), Palden Lhamo outdid all the other protector-deities in her promise to protect the king's Trulang shrine. She presented an iron cup and pledged "Erect an image of me, and I shall protect this royal shrine from any future damage by humans and mamo demons!” She is also said to have advised Lhalung Pelgyi Dorje to kill the anti-Buddhist king Langdarma in 841 CE, and is described as the “Dharma-protectress of Lhasa”. DescriptionShe is the only female among the traditional “Eight Guardians of the Law” and is usually depicted as deep blue in colour and with red hair to symbolise her wrathful nature, crossing a sea of blood riding side-saddle on a white mule. The mule has an eye on its left rump where her angry husband's arrow hit it after she killed her son and used his skin as a saddle blanket, before she became converted to a protector of the dharma. She is considered to be a form of the Hindu goddess Mahakali and also a wrathful emanation of Saraswati. She has three eyes and is often shown drinking blood from a human skull. Moreover, H. C. Beasley claims: "Palden Lhamo was believed by the Tibetans to have been reincarnated in the late Queen Victoria, and as one of the Eight Terribles, arrayed in her full regalia, she lacks nothing of the horrible, and, outwardly at least, lives up to her reputation."