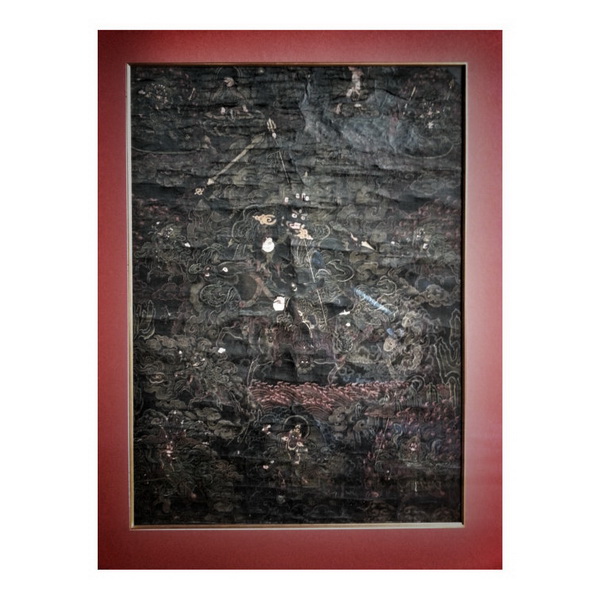 See it in the Museum
Emporium
Orientation 2
Wall object 6

The principal image of this painting represents one of the numerous forms of Dharmapala Sri-Devi (Tib.: dPal ldan lha mo) («palden lhamo») - chief guardian - goddess of Tibetan Buddhism. The four-handed three-eyed fearsome Sri-Devi is riding on a human skin saddle upon a mule on a sea of blood. The upper right hand brandishes a sword (khadga), the other right hand holds in front of her breast the blood-filled skull-cup (kapala) of a child. The upper left hand is brandishing a ritual dagger (Skt.: vajrakila; Tib.: Phur pu). The lower left hand holds a trident (trisula).She wears a garland of severed heads. From the saddle-straps in front is suspended a sack full of diseases. She wears a ﬂowing garment and is decorated with a diadem of skulls, a garland of heads and bone ornaments. Sri-Devi is surrounded by her entourage. Above are two unidentiﬁed teachers of the the bKa’ brgyud («kagyü») order of Tibetan Buddhism.

(Formerly Collection Heidi & Ulrich von Schroeder; 2014-01)
Palden Lhamo
Palden Lhamo (pronounced: 'Pelden Lhamo'), Panden Lamo (Wylie transliteration: dPal ldan Lha mo), Shri Devi (Sanskrit), or Okkin Tungri (Mongolian) is a protecting Dharmapala of the teachings of Gautama Buddha in the Gelug school of Tibetan Buddhism. She is also called Remati. She is the wrathful deity considered to be the principal Protectress of Tibet.
Palden Lhamo is the consort of Mahakala and has been described as "the tutelary deity of Tibet and its government", and as "celebrated all over Tibet and Mongolia, and the potent protector of the Dalai and Panchen Lamas and Lhasa."