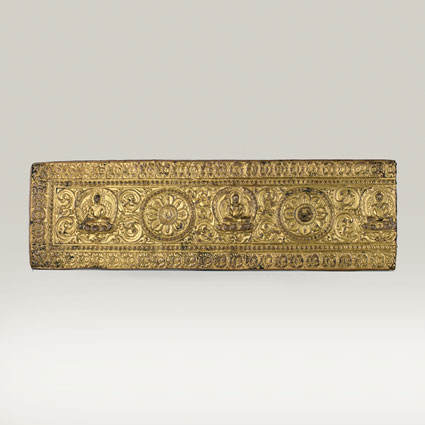 See it in the Museum
Chapel
Orientation 1
Wall object 2

The inner rectangular section for this manuscript cover is decorated with tree Buddha images seated in meditation attitude (samadhi )inside aureoles interspersed with circular lotus fowerheads admist scrollwork. The outer section is decorated with a row of petals, a string of pearls, and a border of rays.

Buddha images clad in monastic robes in the meditation attitude usually represent as a group of three images Manusibuddhas, i.e. huma or mortal Buddhas of the nirmanakaya. However, depending on the individual disposition of the worshipper, a group of three images can have more than one meaning. Such a group may be contemplated as the "Buddhas of the Three Times", namely Kasyapa (past), Shakyamuni (present), and Maitreya (future). A group of three Buddha images may also be associated with the Mahayanist perception of the three fold essence of the Buddhas, the "three bodies" (trikaya), known as dharmakaya, sambhogakayaand nirmanakaya (or rupakaya). Another association may be the three-fold nature of Buddhism, namely buddha, dharma, and sangha.