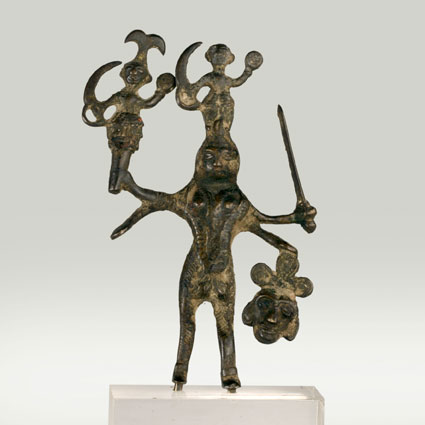 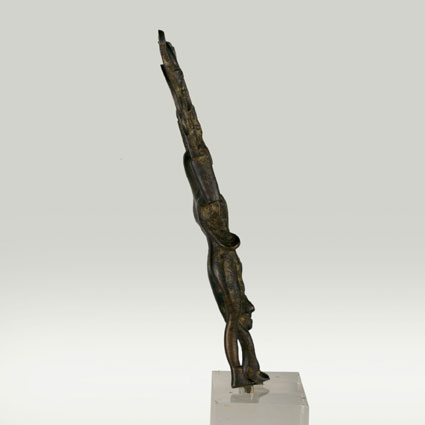 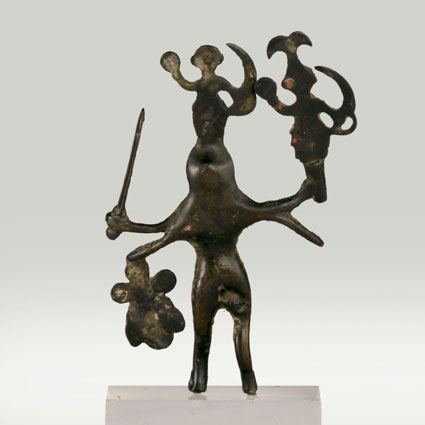 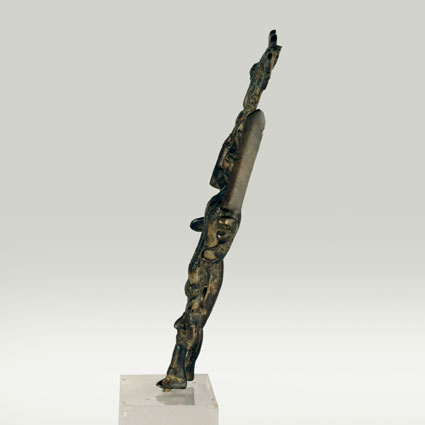 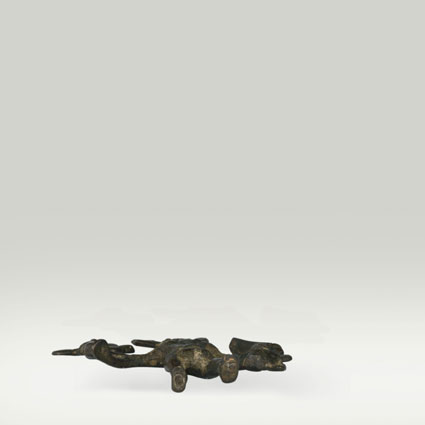 Mythology
Iconography
Shri Durga Devi
All ways of knowledge are your aspects, O Devi; so are all women in the world, endowed with various attributes. By you alone, O Mother, this world is filled - Chandi, II, 6

Durga's story appears primarily in the Skanda Purana, in Chandi, itself a part of the Markandeya Purana, but very similar stories are told in the Brahmanda Purana and also in the famous epic, the Mahabharata. She also appears elsewhere in tantrik texts, including as Mahishamardini (killer of the demon Mahisha) in the Kulachudamani Tantra.Durga Devi (c) Jan Magee 1979 The gods lost their empire to two great antigods (asuras), Shumbha and Nishumbha, and prayed to the Goddess for help.
Needless to say, the ever compassionate Devi took on these proud antigods and vanquished them utterly. To this end, she assembled an entire army of Shaktis similar to her and when things became very tough, projected Kalika out of her third eye. She is called Durga because she slayed the son of the arch-demon Durga, son of Ruru.

As the Matrikabheda Tantra points out, the names of the goddess are really adjectives, and she is one, under these different descriptions. For example, the goddess in Chandi takes the forms of Kali, Sarasvati and Vaishnavi, representing the three gunas, to subdue the host of demons.
As Lalita, she subdued the demonic Bhandasura at the request of the gods, who then built the Shri Yantra to celebrate her greatness.
The metaphor is that she is cruel to the demonic; that is to say to the proud ego of man.

The hymn to Durga in the Mahabharata contains the verses (shlokas):
"I salute Thee, leader of Yogis, one with the Brahman,
Dweller in the Mandara forest.
Virgin, Kali, spouse of Kapala, of tawny hue.
Salutation to Thee, Bhadrakali.
Reverence to Thee, Mahakali,
Chandi, Fearless one. Salutation to Thee,
Saviour imbued with all good fortune."
(Arthur Avalon's translation in Hymns to the Goddess.)

In Hinduism, Durga (Sanskrit: "the inaccessible"or "the invincible") is a form of Devi, the supreme goddess. Goddess Durga is considered by some Hindus to be the mother of Ganesha, Kartikeya as well of Saraswati and Lakshmi.
Durga is depicted as a warrior woman with 10 arms who rides a lion or a tiger, carries weapons and assumes mudras, or symbolic hand gestures. This form of the Goddess is the embodiment of feminine and creative energy (Shakti).

Durga in the Hindu tradition
The acknowledgment and reverence of the Female Principle, The Goddess, first appears in Hinduism in its most ancient authority, the most ancient of Indo-European texts, the Sanskrit Rig Ved itself. Whereas Indologist scholars have seen fit to suggest that the worship of the "Primal Mother" is an introduction into the religion from the Dravidian population, it cannot be ignored how tutelary The Goddess was to the Aryans themselves.
The "narration of energies" , known in Sanskrit as "sukt" appears in the Rig Ved as the (Rig Vedao'ktam - literally, "created of the Rig Ved") "Devi Suktam."

The personification of Nature, Shakti ("Energy"), or of Universal Consciousness was taken, rightly so, by the Vedic Indians to be utterly beyond human comprehension. Indeed, several Sanskritic verses often demonstrate an apologetic tone to the perceived gods, asking and stating the seeming impossibility of the task of "Divine Description".

The Vedic Goddess, known by various names, is commonly regarded as the collective strength of all that is. She is Aditi, the Solar Mother, Creatrix Superior, mother of the Sun and the creative potency of The Lord of the Universe Himself.
The Gayatri mantra, chanted with much fervor by practicing Hindus, is dedicated to the Sun not as a star, but for His (the Sun's) energy, i.e. Shakti.

According to the narrative from the Devi Mahatmya of the Markandeya Purana, the form of Durga was created as a warrior goddess to fight a demon. The demon's father Rambha, king of the demons, once fell in love with a water buffalo, and Mahish Asur (the demon Mahish) was born out of this union. He is therefore able to change between human and buffalo form at will (mahish means "buffalo"). Through intense prayers to Brahma, Mahishasur had the boon that he could not be defeated by any man or god. He unleashed a reign of terror on earth, heaven and the nether worlds.
Eventually, since only a woman could kill him, the Holy Male Trinity bestowed a dazzling beam of energy upon their own consorts, transforming them into one generic goddess, Durga.

The Great Goddess is said to be exquisitely beautiful. Her form is blindingly bright, with three lotus-like eyes, ten powerful hands, lush hair with beautiful curls, a red-golden glow from her skin and a quarter moon on her forehead. She wears a shiny oceanic blue attire emitting fierce rays. Her ornaments were carved beautifully of gold, with ocean pearls and precious stones embedded in it. Her face was sculpted by Shiva, torso by Indra, breasts by Chandra (the moon), teeth by Brahma, bottom by the Earth, thighs and knees by Varuna (water), and her three eyes by Agni (fire). Each god also gave her their own most powerful weapons, Rudra's trident, Vishnu's discus, Indra's thunderbolt, Brahma's kamandal, Kuber's gada, etc. Himalayas gifted her a fierce whitish golden lion. On the end of the 8th and beginning of the 9th day of waxing moon, Chanda and Munda came to fight the goddess. She turned blue with anger and goddess Chamunda leaped out of her third eye. Her form was the most powerful one with 3 red eyes, blood-filled tongue and dark skin; who finally killed the twin demons with her sword. This form of the divine goddess is worshipped during the sandhikshan of Durga Puja festival, as sandhi/chandi puja. Finally, on the tenth day of waxing moon, goddess Durga killed Mahishasura with her trident.

The word Shakti, meaning strength, reflects the warrior aspect of the goddess, embodying a traditional male role. She is also strikingly beautiful, and initially Mahishasura tries to marry her. Other incarnations include Annapurna and Karunamayi (karuna = kindness).
The 9 days Durga Puja is the biggest annual festival in Bengal, celebrated likewise with much fervor in the other extremity of India, Gujarat, and parts of Eastern India, but it is celebrated in various forms throughout the Hindu universe.
The day of Durga's victory is celebrated as Vijaya Dashmi (East and South India), Dashain (Nepal) or Dussehra (North India) - these words literally mean "the Victorius Tenth" (day), vijaya means "of-victory". In Kashmir she is worshipped as shaarika (the main temple is in Hari Parbat in Srinagar).
The actual period of the worship however may be on the preceding nine days followed by the last day called Vijayadashami in North India or five days in Bengal, (from the sixth to tenth day of the waxing-moon fortnight). Nine aspects of Durga known as Navadurga are meditated upon, one by one during the nine-day festival by devout shakti worshippers.
In North India, this tenth day, signifying Rama's victory in his battle against the demon Ravana, is celebrated as Dussehra - gigantic straw effigies of Ravana are burnt in designated open spaces (e.g. Delhi's Ram Lila grounds), watched by thousands of families and little children.
In Gujarat it is celebrated as the last day of Navaratri, during which the Garba dance is performed to celebrate the vigorous victory of Mahishasura-mardini Durga.

The Goddess Durga worshipped in her peaceful form as MahaGauri, The Fair Lady, Shree Shantadurga also known as santeri, is the patron Goddess of Goa. She is worshipped by all Goan Hindus irrespective of caste and even by some Christians in Goa.
Goddess Durga is worshipped in many temples of Dakshina Kannada district of Karnataka.