Manjusri, Padmapani and Vajrasattva - "Protectors of the Three Spiritual Families" 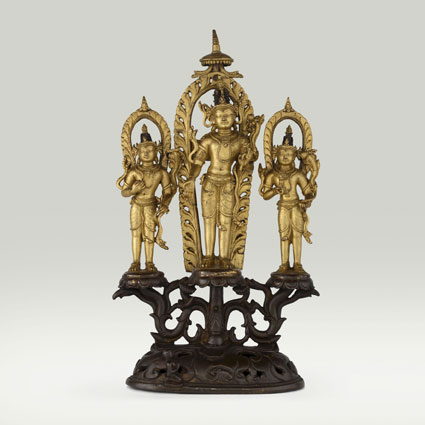 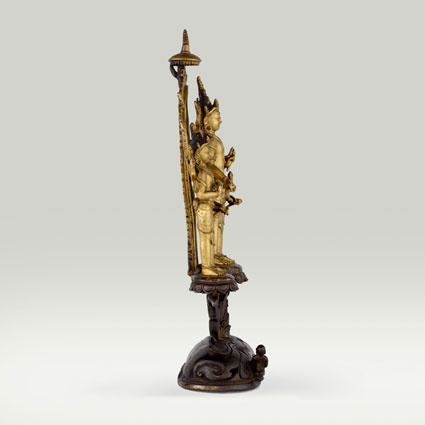 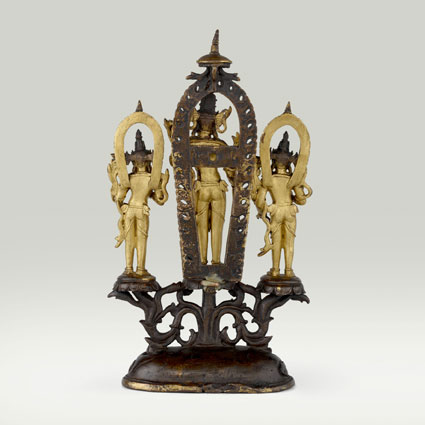 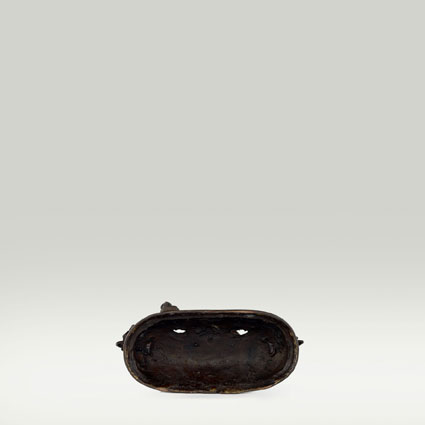 Description
Iconography
Solid cast in two or more parts.
The three images are fire gilt whereas the stand is left ungilt.
The bottom of the pedestal is not sealed.

This group represents a trinity of popular male Mahayana deities composed from left to right of Manjusri (Tib. ’Jam dpal dbyangs), Padmapani (Tib. Phyag na padmo), and Vajrasattva (Tib. rDo rje sems dpa’). The deities are standing in a slightly bent attitude (abhanga) on lotus flowers carried by three stems growing out of the semi circular stand below. Padmapani, a popular form of Avalokitesvara, occupying the centre position and being of larger size, extends the right hand in the gesture of charity (varada mudra) and holds in the left hand the stalk of a lotus flower (padma) blossoming above the left shoulder. Manjusri, to his proper right, holds the right hand, turned inwards, in front of the chest, while the left hand holds the stalk of a blue lily (nilotpala) surmounted by the manuscript (pustaka) of the Astasahasrika Prajnaparamita Sutra which is together with the sword one of the principal attributes of Manjusri. Vajrasattva, to the proper left of Padmapani, who is shown here as Bodhisattva, holds in the right hand a diamond sceptre (vajra) while the left hand holds the stalk of a lily (utpala) supporting a prayer-bell (ghanta). The centre image is encircled by an aureole surmounted by a Stupa. The heads of the two side figures are set off against a pointed nimbus. Note the small effigy of Amitabha on the head of Padmapani.
During the Qing dynasty, the Imperial workshops produced many copies of Tibetan, Nepalese, and Indian statues such as this Chinese Påla replica. In the collections of the the Forbidden City (Zijin Cheng) in Beijing are a number of replicas of which the original Tibetan, Nepalese, and Indian statues have also survived.
Manjusri: alternate name: Vajrananga Manjughosa
(From Wikipedia, the free encyclopedia)